Hal Porteous on the Liquidator 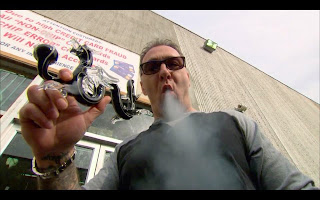 One bog reader spotted someone that looks like Weird Hal Porteous on the Liquidator last night Season 4, Episode 6 : Going, Going... Bong Aired: Feb 12, 2015. Weird Hal is that idiot that raps like Al Yonkavic. He did that pathetic one imitating Happy Planet's I'm on a boat with convicted cocaine smugglers Rob Shannon and Jody York. Then he did another bizarre one of him transforming from a nerd to a creep with a patch licker kissing one of his ridiculous rings. If that's not enough to make a grown man dry heave I don't know what is. Why the liquidator would descend so low as to have a low life like that on their show is beyond me.