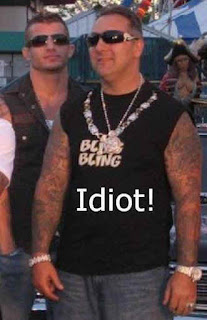 Weird Hal Porteous made the front page of the paper today. Talk about pimping the clown. Kim Bolan is reporting that "A longtime Vancouver Hells Angel is offering to help people get licences to grow their own medical marijuana “everywhere in Canada except Quebec!!!!” Hal Bruce Porteous, 45, made the offer in an Instagram post, asking followers who want the licence to send him a direct message." Everywhere except Quebec because the Quebec brothers would Je me souviens his ass faster than they did the Ontario Village Idiots.

Here's the deal. Weird Hal is an idiot. If he had half a brain he would be dangerous but he doesn't. That makes him harmless. If he wants to make some money off of legal pot them let him. God knows he can't make any money in the hip hop industry. He made two ridiculous music videos that made him the laughing stock of the entire planet. Weird Hal is not from Haney. Stiff gritty would roast his preppy ass faster than he slew Madchild.

You can put that preppy little b*tch on the most expensive motorcycle on the planet and guess what? He'll still be a preppy little b*tch. This is the picture that was on the front page of today's Vancouver Province. He's sitting on an insanely expensive show bike wearing sneakers. I told you the guy is an idiot. Cruisers sit really low. His short legs barely touched the ground.

I hear Weird Hal was really close with Dany Kane. You gotta hand it to the guy for coming out of the closet with all that hair dye and jewelry. He comes out loud and proud AC/DC all the way and I'm all for LGBT rights. Yo go girl. Far far away.

Having the Hells Angels involved with medicinal marijuana licenses is concerning because most of those grows also grew for recreational use. It's a mute point now that pot is being legalized but it was highly relevant when pot was illegal. So this tip came from Andrew Richards. Is he a member of the gang task force? Nope. He used to be. Back when it was under regional jurisdiction with OCA. He then moved to the Port Moody PD and now appears to have retired and has helped start a new company. They even have a relevant media page. Now that pot is being legalized I really think we need to rise above the obsession with pot and start dealing with crack, crystal meth and fentanyl. Obsessing over pot while we ignore those deadly drugs is misguided.

Since Andrew Richards has confirmed that the BC Gang Task force hasn't lifted a finger to bust Hells Angels ever since the Kelowna Summer Jam when the OMGU was disbanded, it is clear we need to bring back the OMGU and put it under Regional Jurisdiction since the RCMP are clearly not interested in dealing with organized crime. Andrew Richards and Gary Shinkaruk are the ones the BC NDP should consult with on how to get that ball running.