Bustin more caps at the Range: Masada and the 629

I went to the Range today with an old friend and tried out the 9 mm Masada as well as the .44 Magnum Smith and Wesson 629. Nice. Israeli speed and Clint Eastwood power. Those are my favorites along with the .357 Ruger. My friend brought a .44 Magnum Ruger Redhawk and I was excited to compare the Smith and Wesson 629 with the Redhawk. I had heard the Redhawk was bigger and heavier which meant it would have less recoil.

When I picked it up, it wasn't heavy at all. It was a tiny bit nose heavy but that was strategic to prevent the nose from rising after firing. It had a great overall balance and the handle had a very nice fit. It's a solid alternate to the 629. My buddy also had a .454 which was much bigger and heavier but the recoil was fine. I've avoided the higher calibers but these were nice. 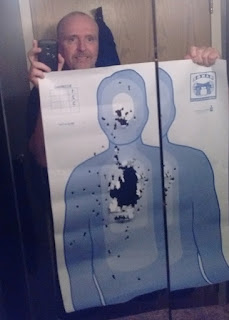 I love the Massada. I've always admired Israeli firearms. The Dessert Eagle is legendary and the Jericho was sheer precision. The new Masada is no less. The Jericho was modeled after the Czechoslovakia CZ 75 which is an excellent target pistol. The CZ Shadow is very high end. It is state of the art. The Jericho was an Israeli version of that which retained the precision and made it very affordable. The Masada is completely different. It's striker fire and is modeled after the glock. I'm not really a glock guy because that's the weapon of choice for the yuppie gang bangers but this Israeli glock is awesome. It's a combat pistol designed for rapid fire.

At first I wasn't sure what that trigger on the trigger was all about although I did like the feel. My buddy explained that's the safety from the glock. If the gun drops or is jarred, it won't go off unless that trigger on the trigger is pulled. Then again, if you don't put one in the chamber until you're ready to shoot, you won't have an accidental discharge either.

I climbed Masada when I was in Israel. It's a magnificent fortress by the Dead sea. The hike is like the Grouse grind but the trail is less intense. However, you're hiking in the heat so bring lots of water. When I told a coworker the story of Massada he laughed and said, what, does the gun come with one bullet? No, I replied. The idea is we fight in their memory. Liberty or death.