The Force has awakened: Trudeaumania has begun 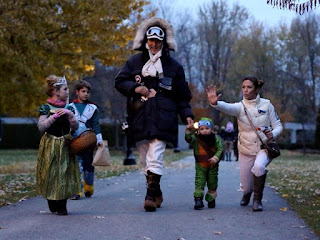 The morning breaks, the shadows flee. Canadians have spoken. Justin Trudeau's campaign was one of hope and tolerance over Harper's hate and fear. One of the slogans on facebook was "I don't hate my neighbors. They make me samosas." Harper's legacy is one of hate, intolerance, fiscal irresponsibility and tax paid propaganda. Stephen Harper abandoned every traditional conservative principle known to man. He took the Reform Party and merged with Mulroneyism, the very entity the Reform Party was created to oppose. Canada is better than that. That's why Dona Cadman pulled her support. Hamilton made us proud to be Canadian. Thomas Mulcair was a good man. It's time for all of us to move forward. Peace.

Update: I will say this: civil liberty is important. Justin's father, Pierre Elliot Trudeau, was the one who gave us the sacred Charter of Rights. That was a good thing. We can debate property rights and gun ownership until the cows come home. The right to a fair trial, the right to have a lawyer, the need to be charged with an offense before being arrested and detained, the protection from unnecessary searches and seizures as well as protection from warantless surveillance are all fundamental rights in any democratic society. Those same rights are found in the US Bill of Rights as well as the Canadian Charter of Rights.

I did not endorse Justin Trudeau during his campaign. At first I was exited about the idea of him running but was shocked when he voted with Harper to throw away the Charter of Rights his own father gave us. In those votes, Thomas Mulcair supported the Charter of Rights, Justin Trudeau did not. Harper was the evil emperor who did everything in his power to crush those rights.

I am encouraged by the fact that Justin is determined to amend the hated Bill C-51 immediately. Amending it isn't good enough. It needs to be thrown out because it is illegal. It violates the Charter of Rights which is the highest law of this land. I am hopeful he is not paying lip service to civil liberty. I am hopeful that we can now celebrate the anniversary of the Canadian Charter of Rights, something Harper refused to do. I am hopeful that now we can once again protect civil liberty after Stephen Harper destroyed it.

I am encouraged Justin has notified Obama that he will keep his campaign promise and end Canada's participation with bombing raids in Syria. Canada had a long history of peace keeping established by Lester B Person who won the Nobel Peace prize in 1957. Before Stephen Harper, Canada never had a reputation for invading other countries. Canadians were always the diplomats trying to keep the peace. We took combat roles in WWI and WWII as well as in the Korean war because we were helping liberate countries who were invaded and oppressed.

During the last US election, Donald Trump stated his position on the war in Libya. He said he would invade them and take their oil. He said when you go to war and you win, that is the spoils of war. Donald Trump was simply an honest George Bush. He was however, not a patriot. The American revolution was about putting an end to imperialism and creating a free republic. It was not about creating a new super power to take over and rob the world. The American Constitution protects a free republic. It does not create an empire that takes over other countries and turns them into colonies. I seem to remember some split tea over taxation without representation.

Chretien was right for not participating in the invasion of Iraq which was based on a premeditated lie. MI 6 gave the media false information about Iraq's weapons of mass destruction. The US sold Saddam Hussein chemical weapons to use on Iran just like England sold Chemical weapons to Syria. Canada was wrong for helping Sarkozy, le chien sale, execute Gaddafi for choosing to buy a reactor from Argentina instead of France. History has recorded that.

Justin Trudeau scraping Harper's fleet of F-35's is a good thing. The F-35's are a bad investment. They are expensive to maintain, Canada can't facilitate the air to air refueling and they don't work in Canada's arctic so they aren't for defending Canada, they are for invading other countries for their oil. The Boeing Super hornet is a much better investment. Boeing is good. Lockheed Martin is bad.

If we want to confront ISIS in Syria then we are going to have to explain why Stephen Harper's body guard and CSIS were funding them. If we want to confront terrorism in Canada we need to charge CSIS with murder for supplying the explosives for the Air India bombing. We need to stop spending millions of tax dollars trying to turn drug addicts into terrorists. What happened to John Nuttal in Surrey wasn't just entrapment, it was unethical. I've heard talk about a new missing woman's inquiry. How about a missing money inquiry? How about investigating the billions of dollars CSIS and the RCMP's anti terror unit lose not just spend from their budget every year. That is theft. When you give a drug addict thousands of dollars to commit a terrorist act and the C-4 explosives to do it, you haven't saved the world from a terrorist, you just created one.

So let's hope Justin Trudeau can restore Canadian dignity which Stephen Harper desecrated. The Empire will not strike back on my blog simply because in Canada the Force has awakened. Trudeaumania has begun. Gentlemen may cry conspiracy theory conspiracy theory but there is no theory. The conspiracy has already begun. This is the new Star Wars trailer. Peace. Justin Trudeau promotes trade agreement with Japan. Is this really a trade agreement or does it really do away with civil liberty like FIPA and all the others? Free trade is good. Compensation awards and removing civil liberty is not. The problem with NAFTA was the chapter 11 compensation awards. It gives corporations the right to sue the government under closed door tribunals not courts, and get financial compensation if the government prevents the corporation from doing something harmful. That is insane. It gave one corporation a lump sum of tax dollars because the government wouldn't let them dump toxic chemicals in Canada.

The compensation awards are bad business for tax payers financially and they remove citizens' democratic rights. Instead of elimination this provision from successive trade agreements, each trade agreement has made this insanity worse. Civil liberty is still under attack.