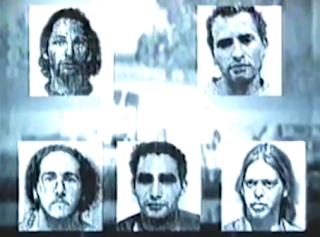 There elephants dot com is reporting that "On the morning of 11 September, 2001, five Israeli nationals traveling through New York City in a company van were arrested in connection with the terrorist attack on the World Trade Center towers. According to police, traces of explosives were detected in the van and the men were detained and questioned for 72 days before being deported to Israel without having been charged with a crime."

"Prior to their arrest the Israeli’s were seen by witnesses photographing and celebrating the destruction of the twin towers from multiple vantage points including a parking lot at Doric Towers and the roof of Urban Moving Systems, the company for which some or all of them worked. One of the men would later state during a T.V. interview in Israel that their stated purpose was to document the event. Urban Moving Systems appears to have been a Mossad front company."

Adam Green covered the release of the documents on Youtube. The Corbett report covered the story when it happened. Everyone said that there were Arab Muslims seen celebrating on 9/11. Turns out they weren't Arab and they weren't Muslim, they were Israelis.

Filming the events of 9/11 is not surprising. Everyone was doing that. Witnesses claim they were celebrating the destruction of the towers. That is rather odd. It was such a shocking morbid event celebration was inconceivable. I'm certainly not going to hate on Israel. I'm simply going to point out some similarities between 9/11 and the attack on the USS Liberty.

The World Trade Centre was half full of asbestos. The Port Authority took the insurance company to court to have them pay for the asbestos removal and lost. Larry Silverstein then purchased the WTC and insured it against a terrorist attack. The fact that he insured the towers against a terrorist attack was not a conspiracy. The fact that he bought the towers knowing they were half full of asbestos was. After the 9/11 tragedy, Larry Silverstein and the Port Authority took the insurance company back to court and this time were awarded twice the value of the towers.

That's like being in a three car collision and being paid twice the value of your car because two vehicles struck it. It is unheard of. Replacement cost pays the cost of replacement not double the cost. Doubling your investment from that horrific tragedy was obscene.

In addition to the twin towers, the third tower fell on 9/11 when no planes hit it due to heat and fire. Steel frame buildings do not collapse into their own blueprint at free fall speed due to heat and fire. The only way that happens is if the load bearing beams are blown out in a controlled demolition. Professor Steve Jones found traces of thermite in the 9/11 ruble.

Remember the Liberty!: Almost Sunk by Treason on the High Seas

OK so now let's take a look at what happened to the USS Liberty. The USS Liberty was a US battleship that was attacked and almost destroyed by Israel during the 6 day war. That part is undisputed. Everyone claims the attack was a mistake. That part is disputable.

The USS Liberty was well marked flying an American flag. Alex Jones made an excellent documentary of the event which has since been confirmed by a recent book called Remember the Liberty!: Almost Sunk by Treason on the High Seas.

One of the Israeli fighter pilots saw the US Flag and refused to fire on the ship. He was ordered to fire and threatened with court marshal if he did not. Again, I'm not going to hate on Israel here. I'm simply going to point out that they were acting under directions of President Johnston. When the USS Liberty came under attack they requested air support. A nearby US Aircraft carrier sent some fighter jets to come to their aid. President Johnston recalled the air support and said he wanted that ship sunk. Kennedy was assassinated after vetoing Operation Northwoods. After his assassination, President Johnston implemented it. 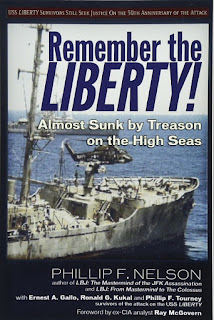 Colonel Edward P. Cutolo testified that Michael Harari, a senior Mossad agent met Col. Tony Noriega and CIA Agent Edwin Wilson shipping cocaine from Columbia though Panama to the US in Operation Watch Tower. Israel has the same problem with CIA corruption as we do.