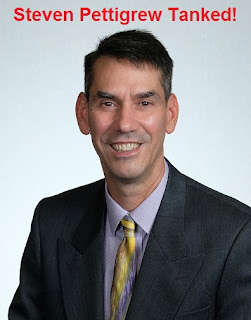 The Surrey Now Leader is reporting that Steven Pettigrew has left the Safe Surrey Coalition. Oh Happy Day. I told you that guy was a wing nut. That is why I did not endorse him. He single handedly sabotaged the Hawthorne Park campaign. He was an agent provocateur. Either that or he was just plain stupid. His departure from the SSC had nothing to do with saving any trees.

Doug McCallum explained “I am not surprised by Steven’s decision to split from the Safe Surrey Coalition,” McCallum stated. “What I find disappointing is his treatment of the voters who cast a ballot for him as a member of the Safe Surrey Coalition. We were very open, transparent and specific of what we stood for and intended to do if elected. Steven was fully aware of Safe Surrey’s platform and was more than happy to run an entire campaign with us. Since he’s been elected to council, he has conveniently forgotten the platform and the promises we made to the people of Surrey.” No kidding. Doug McCallum was very clear on his mandate to get rid of the LRT and the RCMP. Steve exploited McCallum's name and budget to get elected. As I said, he totally screwed up the Save Hawthorne park campaign. I was there. I saw it.