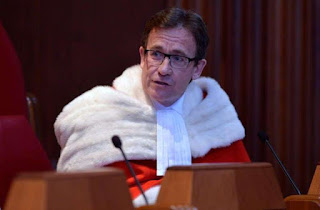 The Canadian Press is reporting that "Supreme Court Justice Clement Gascon says he suffered a panic attack last week before he briefly went missing Wednesday night. Gascon, who has already announced plans to retire in September, said in a statement Tuesday that he has long dealt with depression and anxiety, an insidious illness he has generally been able to manage, but led him to a crisis last week." He's just another Peter Leask.

Is that why a judge with experience in Business Law concurred with the other clowns in Santa suits to destroy the Canadian Charter of Rights? The greatest act of Judicial Treason in Canadian history? Perhaps they should all retire and reassess their murder of civil liberty.