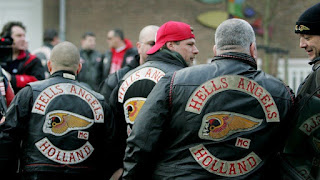 Reuters is reporting that "A Dutch court on Wednesday banned the Hells Angels motorcycle gang in the Netherlands, saying it had a track record of violent crime including the killing of rivals, shoot-outs, and drug and weapon offences. Prosecutors had sought the measure in response to hundreds of incidents in the Netherlands."

“The violence is often so serious and causes so much social unrest that it can be considered in contravention of social order,” the Utrecht District Court ruled, naming the Hells Angels Motorcycle Club Holland and the international organization to which it belongs."

"A spokesman for the national prosecutor’s office said this was believed to be the first time a country had banned the Hells Angels. The gang is regarded by the U.S. government as an international crime syndicate."

Update: When this blog first started I was big on pushing for criminal org status for the Hells Angels in Canada. However, after seeing the corruption and the extremism within the ATF in the US I'm not so sure about that any more. The David Giles declaration said not all members are involved with criminal activity but anyone who uses the name of the club for criminal activity must have that activity approved by the local executive.

That means if a Hells Angel member or associate is convicted of a crime that benefits the club, then the president of that chapter should also be charged. I would prefer to see that embraced in Canada than a blanket criminal organization status. That would help reduce crime because it would make a local executive much more careful about approving any criminal activity.

BTW it was a HA that was involved in the Toronto hit and run that seriously injured a 4 year old.