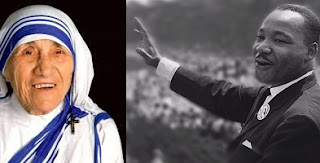 This post is my position on religion. It is the gospel according to Finian. Most people will skip over this post for obvious reasons. When we normally hear the term religion we think wingnut wack job freak. Religious extremism misses the point and scares normal people away for good reason.

Religion once played a large role in my life many years ago. Not so much anymore. Yet like Thomas Paine of old, I am still passionate about the freedom of religion. I believe in a free republic. That is what I believe in.

Although I distance myself from most people who call themselves Christian, I do believe in Christianity. I believe in the teachings of Mother Teresa and Martin Luther King who said "He who serves the poor served God" and "Anyone can be great because anyone can serve." Indeed, service to mankind is the true measure of greatness not material wealth.

Most religions contain the golden rule: "Do unto others as ye would have them do unto you." If everyone did that, this world would be a better place. Therefore, I submit that religion isn’t bad, how man distorts religion is.

My neighbors are Muslims form Syria. They are wonderful. Their children are adorable. There is nothing morally wrong with Ramadan. If you want to fast and pray then by all means, feel free. I had a good friend in Belfast who was Jewish and I worked on a kibbutz in Israel when I was young. I sympathize with the Jewish struggle for a homeland just like I sympathize with the Palestinian's struggle. Jerusalem O Jerusalem.

Without trying to offend everyone on the planet, I will share with you a heartfelt concern I have with two of the religious traditions history has given us. The first is the story of Abraham’s sacrifice which is held as an example by Muslims, Jews and Christians alike.

I realize that sacrifice was in similitude of God’s sacrifice of his son for the sins of the world but is it really. God didn’t kill Christ, someone else did. God knew what would happen to him but he didn’t do it. There’s a huge difference there. Letting your child go to war and die in battle is very different than killing your kid. One is honorable, the other is not.

The religious leaders at the time saw Christ as a troublemaker. They wanted him dead but he hadn’t done anything worthy of death. Some think that if Christ had come in our day, our religious leaders would crucify him all over again.

All the witnesses contradicted each other. They had nothing on him. Until the end, where Christ convicted himself. They came right out and asked him Art thou the Christ? All he had to do was say nope and walk away but he didn’t. He looked them in the eye and said verily I say unto you before Abraham was I am. They snapped. He claimed to have been the one that spoke to Moses in the burning bush. That was either true or the most outrageous blasphemy ever uttered.

We have to move past hating on the Jews for killing Christ. They simply fulfilled the law that was given them. He was the one that gave them that law for God’s sake. His atonement was foreordained. It had to happen. It was part of the plan so to speak.

OK so now back to Abraham. Some people believe that Abraham was righteous but his father was wicked. His father was so wicked he tried to offer Abraham as a human sacrifice to a false God in Egypt when he was young. OK so my first point is, If Abraham’s father’s sacrifice was so evil, what made Abraham’s sacrifice so good? One was to a false God but the other was to a true God? Personally I don’t see the difference. In my opinion both were bad. It breeds fanaticism.

I understand that this life is a test but if God asked me to kill my kids I would say no. End of story. I failed that test but did I really? Failing that test is something I could live with. Passing that test is not. For me it's all about being able to live with yourself. Life is about making choices and living with the consequence of those choices good or bad.

The other religious tradition is the Passover. I respect that Jewish tradition. When I was on a kibbutz in Israel they had a special meal during Passover that reminded them of their hardships in Egypt and how God save them from bondage. At the time I asked one of the members of the kibbutz about it. I thought you said this was a non religious kibbutz. It is he replied. This is just part of our history. I respect that.

Celebrating setting slaves free is always a good thing. It’s just the actual Passover itself that I'm uncomfortable with. Moses was trying to convince Pharaoh to let the children of Israel free. No way he said. I need them to build my monuments.

Then came the plagues. There were flies, frogs and locust. Turning the water to blood. Yet Pharaoh was firm, no surrender until the Passover. On that pivotal night, the Jews were told to spread lamb’s blood on the doorstops of their home. Every home that was marked with the lamb's blood would be passed over by the destroying angel. In every house that wasn’t marked with lamb’s blood the first born son would die.

I respect the fact that the religious tradition celebrates the fact that their children were spared. I get it. Yet the other’s weren’t. I can’t celebrate killing kids even my enemies kids but that’s just me. That’s how I feel. So I have a few issues so I do.

Nevertheless, I am still passionate about the freedom of religion. I believe in a free republic. That is what I believe in. As I've said before, right now I lean towards Buddha who said "If you can, help others. If you can't help them, do no harm to them."