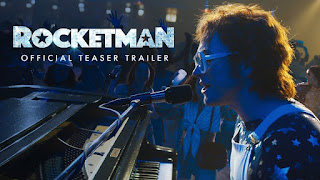 Rocketman, the movie about the life of Elton John, hits theatres on Friday, May 31. ET Canada is reporting that ""Rocketman earned rave reviews and a five-minute standing ovation at its recent premiere at the Cannes Film Festival, but the film's subject admits some scenes in the rock biopic have been uncomfortable to watch. In an interview with the Daily Telegraph (via the Daily Mail), Elton John says he was adamant that the film depict all aspects of his life, including his struggles with bulimia, drugs, mental health and even his own sexuality. "This is how my life was, and I didn't want to cover it and gloss it over," Sir Elton told the Telegraph. And it's difficult to watch because I thought, 'God, I don't want to go back there, thank God I came out of it.'"

Elton John said it was difficult to watch the scenes of his drug addiction but he wanted the movie to be truthful. He's just glad he came out of it. Exactly. Then why the hell would we spend so much money keeping people addicted? Harm promotion is the wrong answer to addiction.