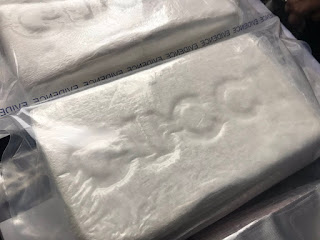 VOCM is reporting that "A week-long investigation by the RCMP dubbed Project Blowfish has netted drugs, guns, cash and vehicles—and the largest seizure of crystal meth the province has ever seen. Staff Sergeant Thomas says police received a tip that three kilograms of cocaine from Montreal was headed to the province, prompting the search warrant. As a result, 25-year-old Tyler Nickerson Butler and 21-year-old Shae O’Keefe were arrested and charged with eight counts each of drug offences and three counts each of careless storage of a firearm. Both have been released from custody on a recognizance and will be back in court on June 26."

CBC is reporting that "It's the second large seizure of cocaine since April 1, after Project Bowman swept up a handful of men and nine kilograms of the substance. 'These are large amounts of cocaine coming into our province within a short period of time – undoubtedly, organized crime groups are behind these shipments,' said Staff-Sgt. Stefan Thoms."

If the RCMP in Newfoundland and Nova Scotia investigate the Hells Angels drug trafficking, why don't they do it in BC? What makes the BC RCMP SO corrupt?