Switzerland, a nation of gun lovers 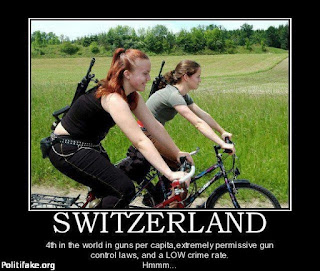 Swiss Info is reporting that "Shooting is a favourite leisure sport in Switzerland. Its roots date back to the late Middle Ages, but especially the 19th century when shooting became an important part of national identity. But gun lovers fear a new weapons law could spoil their fun. Swiss shooters and hunters fear that the European weapons directive being put to the vote on May 19 could jeopardise their hobby." No kidding. Without a Constitution or Charter of Rights the EU will take away your guns and every other civil liberty faster than you can say Adolf Hitler. Swissexit.

"If you have been for a walk in Switzerland you may well have passed near a shooting range or found a civilian with a rifle hanging over his shoulder. Many Swiss are passionate shooters, and some 130,000 people are registered in the shooting clubs alone. They regard the sporting use of firearms as part of national tradition." I support the Swiss model for gun control.

Posted by Dennis Watson at 9:25 PM