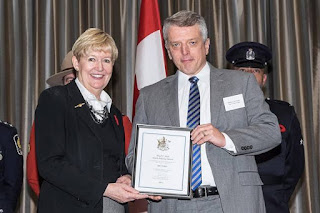 The sad saga of police misconduct continues. Ian Mulgrew is reporting that "The disgraced former lead investigator in the landmark Reza Moazami pimping case is alleged to have had sex with some of the teenagers involved and sold police intelligence, the B.C. Court of Appeal has been told. In a stunning bail application Monday in the province’s top court, Vancouver lawyer Tom Arbogast asked for the 34-year-old Moazami to be released until a full appeal of the concerns can be heard over the next year."

"Last August, Jim Fisher, a 58-year-old highly decorated former detective, pleaded guilty and received a 12-month jail sentence for sex-related offences against two of the women victims in the Moazami case. In 2014, Fisher received a Community Safety and Crime Prevention Award for his work as the lead investigator in the Moazami case. Fisher’s misconduct was said to have happened after Moazami’s trial, but Arbogast said in court that there is now evidence Fisher was engaged in a wide range of misconduct before and during the trial. “It’s quite outrageous what he engaged in,” Arbogast told the court. “To go through all of the misconduct would take days.”

"Arbogast told the court the indications of institutional knowledge of Fisher’s misconduct needed to be more fully explored to determine what was done about it — if anything. He also alleged Fisher had sex with several and perhaps most of the 11 complainants and key witnesses in the Moazami case. Arbogast said Fisher was reputed to regularly give some of them small sums of cash at various times, which added up to a significant amount — more than a police officer’s salary would support."

"His central role in the investigation gave him control and contact with key witnesses, and he counselled them to lie, cheat and misdirect police, Arbogast alleged at the court hearing. Arbogast also alleged before Justice David Frankel that Fisher helped recruit prostitutes for one of the women who acted as a madam, was involved in her business and sold information from police databases to her and others concerned about law enforcement when crossing the border."

"For more than two years, Moazami pimped out girls as young as 14 in Metro Vancouver, threatening, drugging and having sex with some of his 11 victims. He was convicted of dozens of crimes, including human trafficking, sexual exploitation, sexual assault and living off the avails of prostitution." So the lead investigator in a pimping case became a pimp. Go figure.

CBC is reporting that "The defence team alleges Fisher sexually abused six of the 11 young girls and women included in the case against Moazami, as well as one key witness. They suggest Fisher may have committed non-sexual misconduct with 10 out of 11 victims."

The Circle of Police Misconduct

The circle of police misconduct began with RCMP Sgt. Derek Brassington the IHIT investigator who slept with police witnesses in the Surrey Six investigation. It wasn't just one cop with one witness. It wasn't just one cop sleeping with two witnesses at the same time, it was a climate of unprofessionalism that permeated the force where cops would get drunk with witnesses and sleep with them. That is unacceptable.

Aside from the class action sexual harassment law suit within the RCMP, a New York advocacy group reported a witness claimed the police drove her outside of town and raped her. This ties in with the Dianne Rock story and testimony given at the Missing Women Inquiry.