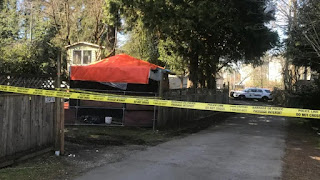 OMG. Remember that armed standoff the Surrey RCMP had with a hostage taking in Whalley March 29th? The man and the female hostage were both killed and the report at the time said they weren't sure if the hostage taker fired a shot. That would imply that it wasn't a murder suicide and that the polcie shot the hostage. Well, that's exactly what happened.

The Peacearch News is reporting that "The Independent Investigation Office says both the man and woman involved in a Whalley standoff on March 29 were shot dead by police. “The male died from multiple gunshot wounds from police and the female died from two gunshot wounds that came from police firearms,” Ron MacDonald, chief civilian director of the IIO, told the Now-Leader Thursday." The RCMP shot the f*cking hostage.

"Did anyone shoot at police?"

“There was a report of a hostage situation of a male who had a gun and had a female hostage,” he replied. “The exact conclusions of exactly what happened, including your question, I don’t really want to get into at this point because before we talk about all those details I want to make sure I have all the facts so I can draw all the conclusions and then speak to the public about that.”

AYFKM? If you aren't prepared to answer that question now then that means no. Kinda hard to shoot at the police when you don't even have a gun. This is outrageous.

It is similar to the tragic shooting of the skateboarder running to the police for help.

Take a look at how Harold Munro's cheap tabloid of corporate trash spun the story. The printed version of the fake news report refers to the incident as a shootout and states "The IIO said members of the police tactical teams entered the home at 7:30 a.m. on March 29 and there was an exchange of gunfire between the officers and the man." That is not what the IIO said.

There was not an exchange of gunfire between the officers and the man. All the shots were fired by the police. Calling it a shootout implies that the suspect was shooting at the police which is not true. This isn't just spinning the story. This is printing a bold faced lie. 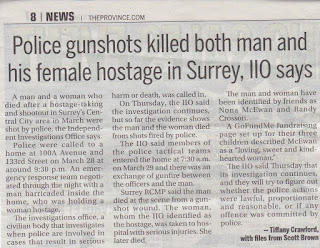 CBC is reporting that "Initially, it was unclear who had fired the gunshots, but the IIO said its investigators have since determined the shots came from police." Harold Munro LIED.

The CTV Report shows the police used a freaking tank. The IIO won't say whether or not a gun was found at the scene. "Someone" said he had a gun but did he really? 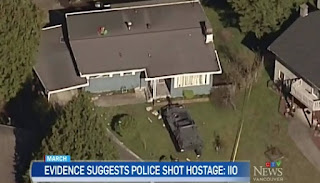 Not surprisingly, Dr Kim is not reporting on this story.