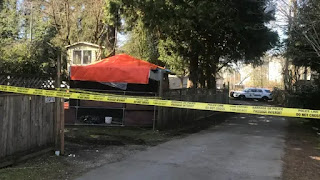 CBC is reporting that "Two people are dead after a hostage-taking that began late Thursday and ended Friday morning at a home in a residential neighbourhood in Surrey, B.C. Surrey RCMP were called to a house in the 13300 block of 98A Avenue around 9:30 p.m. PT on Thursday. Officers arrived to find "a barricaded male and female hostage" inside the house, according to a statement released late Friday morning.

The statement said officers tried through the night to resolve the situation, but entered the home at 7:30 a.m. Friday. "A confrontation with the barricaded male ensued," the statement said. "The male sustained a fatal gunshot wound and was pronounced deceased at the scene."

A woman was also found with serious injuries and later died in hospital. Ron MacDonald, Independent Investigations Office of British Columbia's chief civilian director, said it's believed the man and woman knew each other. MacDonald confirmed shots were fired, but it's unclear how the man and the woman died.

The Peace arch News is reporting that "MacDonald said he can’t say 'definitively at this point' if the suspect fired any shots." Let's hope the police weren't the one's that shot the woman after they stormed the house in a hostage taking. Not a very smart move either way. Two dozen police vehicles, as well as an armoured vehicle, surrounded the home in a residential neighbourhood and forced their way into the home during a hostage taking. Is that really standard procedure?

The video of the entry looked pretty standard. I guess it's a no win situation. If you storm the house without a clear shot of the hostage taker, it is unlikely the hostage will survive. After reviewing the taser incident at the Airport it's pretty clear negotiation is not one of our strengths.