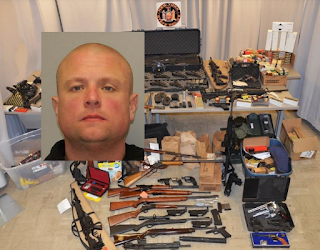 Record Online is reporting that "A police officer with the New York City Department of Environmental Protection has been charged with illegally manufacturing and selling dozens of guns and tipping off a drug suspect about an investigation, state police said Friday. Police said they learned about the activities of Gregg Marinelli, 38, of Plattekill, during the cocaine- and fentanyl-trafficking investigation dubbed “Operation: Bread, White and Blues” that resulted in more than two dozen arrests in February, although Marinelli was not charged in that case."

"Prosecutors say Marinelli, a DEP sergeant and team leader of an agency Emergency Service Unit, manufactured dozens of handguns and assault rifles, including a fully automatic assault rifle, in his home and sold them “to individuals who are legally barred from possessing such weapons.” Those customers included members of self-professed outlaw motorcycle clubs, and Marinelli sometimes delivered the guns using his marked DEP police car, prosecutors said."

He must have been moonlighting on the side for the Agency.

Harley Liberty is reporting that "A veteran first responder is charged with peddling deadly drugs. He’s one of 29 people arrested on drug and conspiracy charges in early morning raids Tuesday, New York State Police said. Investigators say a suburban firehouse was at the center of the illegal activity. A home to lifesaving first responders allegedly became the center of a drug operation that peddled deadly Fentanyl." The Fentanyl pills, known on the street as “blueberries,” were falsely sold as painkillers, CBS2’s Tony Aiello reported."

"Agents recovered more than $200,000, 25 handguns, an assault rifle and other rifles, 2.5 pounds of cocaine, 1,300 Fentanyl pills, ten vehicles and two motorcycles in the raids. Paul Smith, 48, who works as a lieutenant in the City of Middletown Fire Department faces charges of operating as a major trafficker, conspiracy and possessing and selling controlled substances."

Statter 911 is reporting that "It isn’t a stretch to say that there’s a decent likelihood that the two men at the center of a drug ring in New York responded to assist overdose victims who used illegal drugs the me are accused of distributing. Paul G. Smith is a career lieutenant with the Middletown Fire Department and Robert Dunham Jr. is a volunteer with Mechanicstown Fire Company. Both departments are located in Orange County. Law enforcement officials claim Smith and Dunham got drugs and then distributed them through two self-described outlaw motorcycle clubs in the county, the Burnt Pistons and Chingalings." 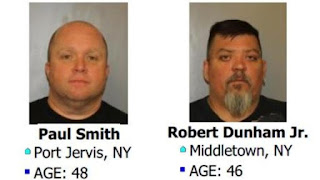 Posted by Dennis Watson at 7:30 AM