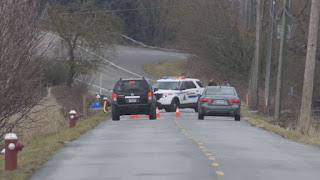 Global is reporting that "A shooting in Richmond on Tuesday has left a man in hospital with what police describe as "potentially life-threatening injuries." According to Richmond RCMP, the incident happened in the 11000-block of Twigg Place on Mitchell Island around 9 a.m. Officers arrived to find a 25-year-old man suffering gunshot wounds. He was rushed to hospital."

"Police said a witness at the scene reported seeing a man dressed in black fleeing the area on foot. Shortly afterwards, police received a separate report of a vehicle on fire in the 5600-block of No. 7 Road. Police have not confirmed the two incidents are related. However, police do believe the shooting is not a random attack."

Posted by Dennis Watson at 1:59 PM