Lilly Singh To Get Her Own NBC Late Night Talk Show 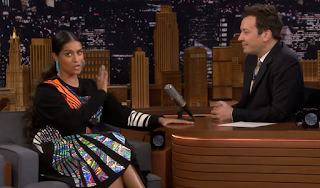 ET Canada is reporting that "Canadian Lilly Sing will be replacing Carlon Daly on 'Last Call'. The newly named 'A Little Late With Lilly Singh' will start in September making her the only female to host a late-night talk show on one of the major networks at the current moment. Singh, who rose to fame on YouTube, was set to announce the news on '"The Tonight Show Starring Jimmy Fallon on Thursday." This is the video clip.

Lilly Sing is a witty Canadian Vlogger who spoke out against racism by saying Let's Make Education Great Again. She did a funny video clip with the Rock. Yo go girl.