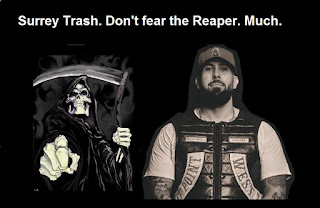 AYFKM? The Toronto Star just posted a picture of Michael de Abaitua-Schulde the HA that was shot dead in Mississauga. Get this, he's wearing West Point rockers. That's the Surrey girl Chapter who can't say they're from Surrey because they're not and they can't show up in Surrey without getting capped. So now they are hiding out with the Ontario Village Idiots just like local loser Damion Ryan who was made a member of the Ontario Nomads before the Quebec brothers shut those clowns down completely. Mississauga doesn't have a chapter of the Hells Angels.

God didn't call him home, the Devil did. Don't fear the reaper. Much. Obviously he's part of the Larry Amero / Rabih Alkhalil Ontario drug dealing network. Robby Alkhalil was arrested in Greece where Damion Ryan got his crowbar patch from. Surrey trash stinking up the whole planet.

Let's send the Quebec brothers in the Big House Crew a box of donuts for taking out the trash.

Update: The Toronto Sun is reporting that "Two Montrealers with lengthy criminal records and gang ties are among three suspects implicated in this week’s gangland execution of an Ontario-based Hells Angel member in Mississauga. Marckens Vilme, 28, is charged with first-degree in the brazen daytime killing. According to La Presse in Montreal, Vilme has had ties with the Ruffriders, a street gang based in the West Island that has worked under the Hells Angels." Like I said when it happened, it was the Quebec members taking out the trash in memory of Vito.

The media claimed that Michael de Abaitua-Schulde was from the Niagara chapter. Rabih Alkhalil from Surrey had drug charges in Niagara. Nic Nero, Robby's co accused in the murder of Johnnie Raposo was a cocaine kingpin in Niagara. Larry Amero and Jonathon Bacon attended Rabih's brother Nabil's wedding in Ottawa before they were shot in Kelowna. Nabil Alkalil was caught with 11 kilograms of cocaine in Ottawa back in 2008 and served a seven year sentence.

The Niagara chapter of the Hells Angels were old men on Viagra tied to Gerard Ward's cocaine trafficking. Larry Amero, Robby Alkhalil and Dean Wiwchar are all tied to the Cub pack / West Point. They don't ride motorcycles they just sell drugs and steal sh*t. If you wear a Cub pack or West Point rocker then you are asking for trouble. They're just Surrey Jacks. Buyer Beware.

A Surrey Jack is a local loser who steals sh*t. They are nothing to fear or aspire to. 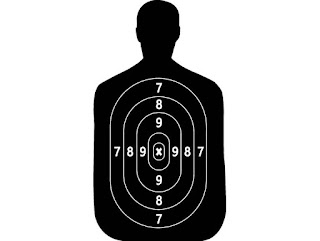 Update: Global is reporting that "Authorities said the fourth suspect, identified as 26-year-old Marc Issa El-Khoury of Montreal, was caught on Wednesday trying to cross the border to the U.S. from Champlain, Quebec. He is facing a charge of first-degree murder."