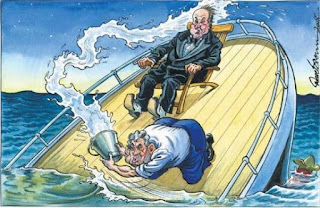 Justin Trudeau just released an official statement in support of SNC-Lavalin's continued fraud. That clown is an idiot. He just sunk his own ship. Him and John Horgan both. In this unprecedentedly insane statement Justin Trudeau rationalized SNC-Lavalins many years of tax fraud by saying SNC-Lavalin is a great company that puts food on the table of many Canadian workers. AYFKM? Their bureaucrats put millions of tax dollars in their own pockets by scamming workers and taxpayers. Chretien was famous for staying "Sponsorship is Good." Now Justin Bieber is saying "Corporate Fraud is Good." Not.

Like I said before, if SNC-Lavalin is denied the contract for the Pattullo Bridge the sky will not fall. Another Canadian company will get the contract which will save taxpayers millions of dollars and put more money in the pockets of the working families that build the bridge. SNC-Lavalin under bids and over charges government contracts. They have a long history of tax fraud. We need to address this. Just like this clown magistrate, Justin Trudeau's statements aren't just stupid, they are corrupt but so are the CONservatives and so is the NDP. We need to root the SNC-Lavalin fraud out of all the political parties.