1.6 tons of cocaine seized at Port of New York 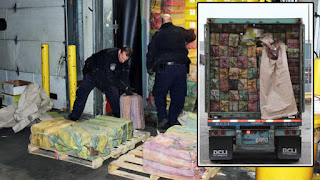 NBC is reporting that "Authorities have seized the biggest shipment of cocaine recovered at the ports of New York and New Jersey in almost 25 years. The massive bust Feb. 28 at the Port of New York/Newark in Elizabeth came after authorities checked a shipping container entering the country. They found 60 packages containing 3,200 pounds of a white powdery substance that proved to be cocaine, U.S. Customs and Border Protection said in a statement Monday. The container was recovered from a ship that originated in South America, the spokesman said."