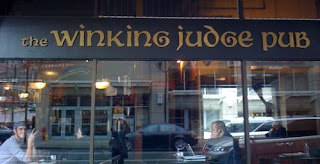 Kim Bolan is reporting that "A B.C. Supreme Court judge has criticized an expert report about the Hells Angels filed by the Director of Civil Forfeiture as full of biased, unsubstantiated claims about the biker club. Davies was also critical of the report’s author, retired Ontario Provincial Police Det. Staff Sgt. Len Isnor. He noted that Isnor’s evidence about Hells Angels photographs he saw inside B.C. clubhouses, establish serious concerns with respect to the extent that his opinions are tainted by confirmation bias, speculation and tautological reasoning.”

AYFKM? Kim Bolan won't say it but I will. Barry Davies is a f*cking idiot. He is sitting on the wrong side of the bench. This brings us back to the founding premise of the Aldergrove Judicial Review board who first coined the phrase Judges are the Problem. Vern tried to be positive. He amended the slogan to read BC Judges: Our Strongest and Weakest link." Barry Davies is a weak link.

The tainted judge is criticizing the Crowns expert witness because he is an expert. It doesn't get any more absurd then that. Len Isnor is without question an expert in the field. He has many years of experience investigating the Hells Angels in Ontario. He was the head of the Biker Enforcement Unit. You don't get any more qualified than that.

The tainted judge even expressed concerns about the expert's assesment of the kids toys found in the Kelowna clubhouse. "Isnor also said in the report that he believed some children’s books and toys had been placed on an end table inside the Kelowna clubhouse before his court-ordered inspection in order to make it seem family friendly. “This is the first time I have ever seen or heard of an area set up in a clubhouse for children. In my opinion, this was set up because of my inspection of the clubhouse,” Isnor’s report said. Isnor testified that in 23 years of investigating the Hells Angels and other outlaw motorcycle gangs, he had never seen children in a clubhouse."

Why did the children's books and toys look suspicious? "The area in which these toys are set up is with the adult type entertainment in there. It just doesn’t mix." Of course it doesn't. The expert witness applied the test of believably and the stunt failed. When the tainted judge criticizes that statement he isn't just showing that he is stupid, he is showing that he is corrupt.

In Australia The New Daily reported that " An Australian Mafia boss allegedly paid $2.2 million in bribes to NSW judges to get lighter jail sentences, a joint investigation reveals."

In Canada William Majcher exposed Canadian judicial Corruption. William Majcher is a former police undercover investigator who brought down a lawyer that laundered money for the Haney Hells Angels which was tied to the murder of Ernie Ozolins. In William Majcher's affidavit he states that "during the course of my employment with the RCMP while working undercover or in handling criminal informants, I became tasked with knowledge and evidence of payoffs, bribery and case fixing that included judges, lawyers and court registry staff in various parts of Canada."

In 2017 Barry Davies acquitted a man whose suitcase that he had checked in at Vancouver International Airport contained a large quantity of drugs. Barry Braindead Davies concluded that the Mounties breached Herman’s Charter Rights by conducting a warrantless search of the suitcase at the airport. AYFKM?

When you go to the airport, you know your lugged is going to be searched. Searching luggage at the airport is not a violation of the Charter of Rights. Barry Davies acquitting that man was a criminal act. Is he stupid or corrupt? He claims he isn't stupid. That only leaves one option: This judge is part of the problem.

This is why I said you need to cut a deal and make a consent order seizing the Kelowna clubhouse and returning the Nanaimo clubhouse. Now the public is being shafted by a dirty judge. Not all Hells Angels sell drugs but any time an associate sells drugs in the name of the Hells Angels, that criminal activity has been approved by the local executive. That implicates every local president whose's chapter members or associates are convicted of criminal activity.

Barry Davies needs to be taken off of this case because of his proven bias which goes far beyond stupidity. It has clearly entered the realm of judicial corruption.

Posted by Dennis Watson at 6:33 AM