Kim Bolan is reporting that Clay Roueche has appealed his absurdly long sentence under the 782 amendment also known as the 2014 Drug Amendment. Gee, I wonder who told Kim that Clay was filling an appeal? It's pretty obvious it was the same person who told her about Hal Porteous offering to help people apply for medicinal marijuana licenses on facebook, Andy Richards.

Andy Richards was in a complete conflict of interest in that case because he and another former cop from Ontario are involved in the legal marijuana business. They are trying to eliminate rivals in their new trade. It doesn't get any sleazier than that.

Clay's arrest was illegal. He wasn't charged and extradited like they should have. They diverted his flight to land in the US for an unscheduled stop and arrested him at the airport. There was no Charter Rights. There was no respect for due process. Their mistreatment of him was puntive.

Needless to say I totally support Clay's appeal to get a reduced sentence for numerous reasons. Freeway Ricky was the crack Kingpin of LA in the /80's during the US crack epidemic. He was originally sentenced to 20 years in prison and had that sentence reduced to 16 1/2 years after an appeal. What Freeway Ricky did was WAY worse than what Clay Roueche did. Clay was accused of smuggling pot into the United States which is now legal in Canada and several US States. Basically that is all he was acused of doing in the US. Yes he was accused of bringing cocaine into Canada but he was never accused of selling cocaine in the United States. Ever.

Clay spent almost two years in solitary confinement. In Canada that's illegal. That alone is grounds to have his sentenced reduced or receive two for one credit. So what happened to him in solitary? He wrote a powerful and inspirational book called the Book of Indomitable Virtues complete with all his own art work. I found it deeply moving because of my previous studies in martial arts philosophy. Clay always had integrity. As Liam Neeson said in the movie Rob Roy, that's something no man can give you and no man can take away.

I've been writing about the Vancouver gang war for many years now. I have never condoned the sale of drugs. My past history has always been on the other side of that battlefield so to speak. Nevertheless, right from the beginning I noticed that Clay was different from the local scum bags who preach L & R (Love and Respect) but do the exact opposite. In real life, they have no honour. Just greed and betrayal. The UN did not start the beef between them and the Bacon brothers. The Bacon brothers under the direction of the Hells Angels did.

The UN never said no one is allowed to do business but us. They simply asserted their right to do business. They stood up to a bully. That was their crime. Take a look at Clay's picture. He looks like Clark Kent for God's sake. Don't get me started on the fact that the current BC Gang Task force is completely compromised and has assisted the BC Hells Angels obtain and maintain a monopoly on the local drug trade. Randy Jones has not been extradited and never will because the RCMP are giving his drug dealers police protection to sell drugs.

In Kim Bolan's article she states that "Roueche argued that he should get the sentence break because he has been a model inmate, “demonstrating leadership and encouraging prisoners to transform their lives.” He has earned 50 certificates while incarcerated, which he says “is an indication that I will live a crime-free productive life.” That is absolutely true.

Clay had a black belt in Taekwondo before he went into prison. While in prison he trained with many other martial artisits and boxers and created his own martial art called the Combined Combat System. One of his students in prison went on to open a martial arts school in Clay's memory and launched a Little Phoenix program which has the endorsement of a local pastor. As I said before, Clay Roueche continues to Shine.

I have always said, no matter what your past, you have a spotless future. I have always supported rehabilitation. Privatized prisons have no mandate for rehabilitation. That's why Norway has a far better prison model. My father spent years volunteering on the prison alternatives program in Matsqui. Clay Roueche is the guy you want to speak to youth not these loser crack addicts the compromised gang task force sponsors. Kids will listen to Clay. I gave one at risk youth I'm close to a copy of Clay's book because it's something he can relate to.

The whole concept of rehabilitation is embodied in Clay's paining of the Phoenix which is profound and inspiring. I have a copy of the print on my wall beside my dining room table. Most of us are familiar with the Phoenix from Harry Potter. The Phoenix is always portrayed as a fiery bird of rebirth. Yet Clay's painting goes far beyond that. The colours are astounding. 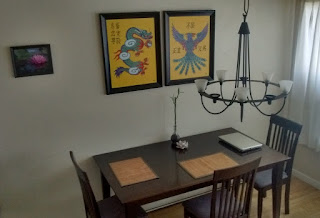 It has the wings and claws of an Eagle, the head of a Thunderbird and the tail feathers of a Peacock. It is powerful and elegant. It reminds me of a friend who left the life years ago and never looked back. It forms the basis of a non profit group Clay started called Phoenix Reborn. It's primary focus is on misguided youth, recovering addicts, military veterans, victims of abuse, and positive re-entry for prisoners returning to society. This is exactly what the world needs.

If Canada ever went to war I would serve beside Clay Roueche in a heartbeat. His ancestors are war heroes as are mine. The world needs more people like him. Word. 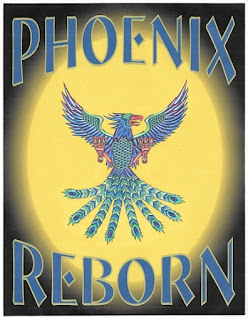