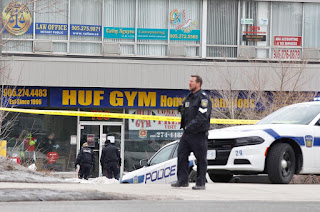 The Toronto Star is reporting that "A full patch member of the Hells Angels was the victim of a fatal shooting Monday in a Mississauga plaza that sent bystanders scrambling for cover in what was described as a chaotic scene. The shooting outside a popular gym comes amidst a massive shuffling amongst the Hells Angels in Ontario, multiple sources told the Star."

"Peel Regional Police are investigating whether a burnt-out car found in the area was the shooter’s getaway vehicle. A senior Hells Angels member from London, Ont., has recently moved to the Niagara Region to bolster the club there while Keswick-area Hells Angels have moved to Ottawa, multiple sources told the Star." The shooting took place Monday around 11:15 a.m.

Sounds like hunting season has just opened for the Ontario Village Idiots. It might even have been the Quebec brothers cleaning house again. Je me souviens yo. Sounds like local cub pack reject Damion Ryan from the disbanded Ontario Nitwits isn't even safe in Ontario. There all gonna have a turkey shoot. No wonder he wants police protection like the rest of the cub pack. 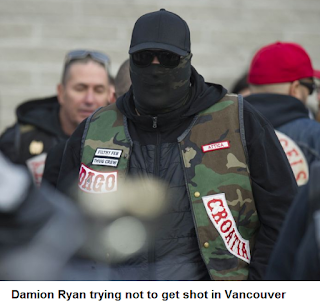 Police are searching for a suspect in the Mississauga shooting because they want to give him a box of donuts. Sorry. No love lost in this one. Just sayn.

Arrest made in slaying of Hells Angel

There's already been an arrest made in the shooting. Press conference Thursday 12:30 PM. "The Hells Angles don't dial 911." Much. In BC and Ontario they run to the cops at the first opportunity. The Ontario Village Idiots are in the Popo's pocket. Rats forever forever Rats.

Ah the shooter is from Quebec.... The Toronto Sun is reporting that "Two men have been arrested and a third is sought in the daylight gangland execution of a Hells Angel in Mississauga earlier this week. Peel Regional Police say two men were arrested in Montreal Wednesday night. A third, Joseph Pallotta, 38, of Quebec, is wanted for first-degree murder."

City News is reporting that "The two suspects in custody are from the Montreal area and will appear in court in Montreal. Markins Vilme, 28, was arrested and charged with first-degree murder on Wednesday night. Johnathan Martinez-Reyes, 27, was also arrested and charged with accessory after the fact to murder. A third suspect, 38-year-old Joseph Pallota, is wanted on a Canada-wide warrant for first-degree murder. Police say he is from the Saint-Leonard area of Quebec and is considered armed and dangerous."

The police claim it was a targeted hit and don't expect any retaliation. That's because when the Quebec brothers start busting caps, the Ontario Village Idiots run for cover. In fact they run to the Popo faster than a teletubbie just like DK did and just like the Softside did when Chad was shot dead and dumped on Spike's doorstop.

So tell me is the BEU going to give the Ontario Village Idiots police protection to sell drugs now just like the Surrey RCMP do for the cub pack? How lame is that?

Posted by Dennis Watson at 7:18 AM