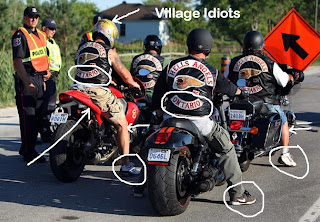 Take a look at this recent photo of some Hells Angels from Ontario. I didn't photo shop it, I just added the arrows and circles. Take a look at the shorts, sneakers and the full face helmet. That is bizarre. People who ride motorcycles make fun of people who ride with shorts and sneakers.

Standard safety equipment on a motorcycle are motorcycle boots. The reason being, if your front end slips on water, gravel or ice, you can kick yourself back up again. You can't really do that with sneakers on. It's like working construction without steel toe boots. It's not very bright.

Shorts on a Harley look dumb. The idea behind wearing long pants and ideally leather is if you put the bike down you slide. Otherwise your skin would turn into hamburger meat if you went down. The ultimate joke is seeing a guy with sneakers and shorts on a motorcycle with a full face helmet. Like that helmet is going to save you. You'll probably just get decapitated because the helmet won't let you tuck your chin to roll from a fall.

What on earth is that guy on the rear left riding? It's a small sports bike. Maybe they're gonna have Vespas now like William van Boxtel in Holland. Come on people. These are the guys that started the Winnipeg gang war because they killed one of their own in Thompson Manitoba? That's what happens when they start smoking too much of their own product. They aren't bikers they're patchovers. The only respect they deserve is a call to crime stoppers to get those little rats off the street.