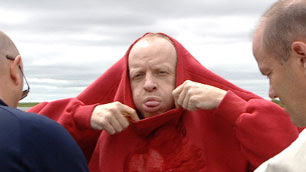 Jeffrey Lynds has been charged with a third count of first-degree murder. Already accused of murdering two men in Montreal, the North River native and Hells Angel member was last week also charged with killing Mark Stewart of Longueuil, Que. in February 2010, according to an article published in the Montreal Journal.

The newspaper reported that Stewart, a narcotic trafficker, was killed by brothers Timothy and Robert Simpson at the request of Lynds, in an effort to eliminate a drug competitor. Well, isn't that a big surprise. A drug trafficking Hells Angel orders the murder of a rival drug dealer. He already confessed to murdering Randy Mersereau but hasn't been charged in that case.

It also leaves us wondering about who murdered Randy's brother and sister in law as well as Rusty Hall and his wife Ellen. All these murder victims associated with Jeffrey Lynds' associates.