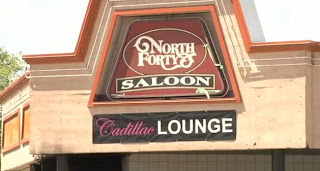 A new strip bar in Rutland has community members concerned. Perhaps the real concern isn't the strip bar it's who's running it. First let's take a look at the location - Rutland. Rutland was in the news recently after two Hells Angels were charged in a Rutland beating death.

That tragic story involved a father who was beaten to death with baseball bats and hammers as he was trying to make peace between his sons and a few kids they knew from High School. Which High School? Rutland High School. Aside from the two hells angels and the president of the throttle lockers, also charged were Daniel Joseph McCrae, 21, Mathew Thomas McCrae, 19, Ansen Lloyd Schell, 19, and Thomas Allen Vaughan, 22 from Rutland Senior Secondary School.

So right after this savage murder a new strip bar opens up in Rutland. Some sources claim it's run by the Hells Agnels, yet that's hard to prove. Tbarz in Surrey is run by the Hells Angels according to a US cross border drug ring inditement. Yet Whiterock Hells Angel Randy Jones has it registered in his mother's name.

So when someone tells me they are concerned about the new strip bar in Rutland being run by the Hells angels, I have to share their concerns. The location is very suspicious after the recent violent murder. Letting them expand their business in that community is an insult not only to Dain Phillips and the community but to Canada and humanity. BTW Please be advised, the new name of the strip club is in trademark violation because the name and domain has already been registered in the US. You're supposed to do a name search before you register a company.