Bush Lies, Palin is an idiot 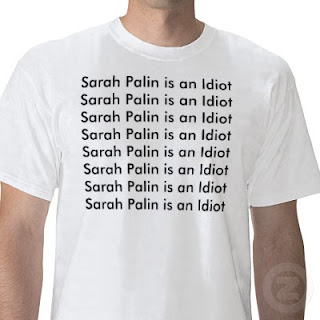 Talk about brain dead drama queens. Sarah Palin twisted the slogan about Bush's invasion of Iraq from Bush lied people died to Obama lies the economy dies. That is an insanely offensive statement from a brain dead idiot.

Bush lied about Iraq's WMD. He lied. MI 6 were caught red handed giving false information about Iraq's Weapons of Mass Destruction to the media in Operation Mass Appeal. It was a malicious premeditated lie that not only cost thousands of innocent lives, it wasted millions of taxpayer dollars.

Palin the Air head claims Obama is over exaggerating the debt so he can raise taxes. Hold the door. Bush lied about how much debt there was and he was instrumental in the crash of the economy with all the investment fraud his family was involved with.

Bush lied about how much debt there was. Both Bushes. The day before 9/11 Rumsfeld warned that the Pentagon has misplaced $2.3 trillion. Misplaced! Trillion! That was before Bush kept sucking money out of congress for his lies.

Obama has said if the US doesn't raise it's debt ceiling, they will have to raise taxes. That is pretty fundamental math. He prefers to raise the debt ceiling. That's why he made the comparison. Obama is not lying or over exaggerating the seriousness of the unprecedented debt the Bush regimes incurred. It is serious and we need to look at it because if the US doesn't get it under control, they will suck us down with them.

Nevertheless, as tax increases are discussed it's important to remember the massive public rallies in England. Raising taxes, stealing pensions and cutting hospitals and education because of reckless and fraudulent military spending is absolutely criminal. In more ways than one. We do need a Canadian Arab spring in this country. Just ask the Rogue Page from Ottawa.