Conrad Black on the Prison System 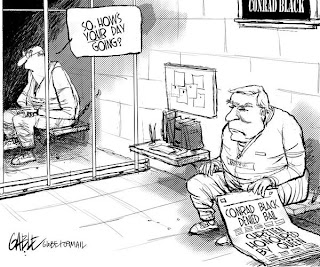 Back in the day we had prisoners of war. Understandably, there is a certain amount of animosity directed toward a prisoner of war. After all, they were caught trying to kill you. Yet they are human beings and are entitled to basic human rights. I'm not going to ramble about prisoner's rights as though it is some kind of demand they are entitled to. I'm going to speak from the position that since we are human beings, treating prisoners like human beings is something we owe ourselves if we are to continue claiming to be members of that race.

I will add that since crime should be punished according to the nature of the offence, I am glad Conrad Black was finally incarcerated for Investment Fraud. Just as we need to address the issue of violent crime, we also need to address the issue of investment fraud since it poses such a legitimate threat to the market and pension security. Robbing a bank is wrong. Whether you come into the bank with a gun, or if you come in with a suit and tie and defraud it, both acts are the same.

Concerns have been raised about Harper’s Corporate Prison Plan and indeed they should. California's prison crisis came about because of the privatization of prisons just like Enron. A privatized prison is a conflict of interest. A privatized prison mandated to make a profit has no regard for rehabilitation or human rights.

Obviously, rehabilitation is not the primary objective of incarceration. Public safety is. Nevertheless, in the spirit of public safely, rehabilitation is a factor. It's not the primary factor but it is a factor nonetheless. After all, "Christians" are taught to visit those in prison and equate it with visiting the sick, feeding the hungry, clothing the naked and housing the homeless.