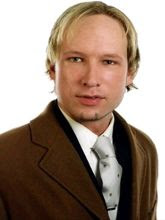 A Norwegian gunman disguised as a police officer beckoned his victims closer before shooting them one by one, claiming at least 84 lives, in a horrific killing spree on an idyllic island teeming with youths that has left this peaceful Nordic nation in mourning.

The island tragedy Friday unfolded hours after a massive explosion ripped through a high-rise building housing the prime minister's office, killing seven people in a scene some likened to the aftermath of 9/11.

The same man - a blond-blue eyed Norwegian with reported Christian fundamentalist, anti-Muslim views - is suspected in both attacks. His name is Anders Behring Breivik.

I had a close friend from Norway. He used to say he was born with skis on his feet. He had served in the military before I worked with him. I found him to be a very honest, trustworthy and hard working man. I am indeed shocked and saddened with the news of an individual fruit loop who has completely lost touch with reality.

I was shocked and concerned when I saw photos of him with a Freemason apron on. I was even more shocked and disappointed to see a bizarre video claiming to be from the Knights Templar calling for a new crusade to decimate cultural Marxism. The gunman opened fire on a youth retreat for young members of the labour party. He killed them for their political beliefs. That is not something St George would endorse. 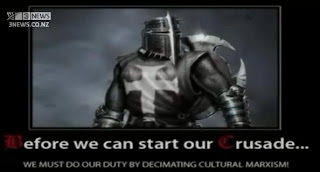 The Knights Templar, aside from being portrayed in the movie Da Vinci code, is the highest degree of Freemason in the York Right. Shriners are Freemasons. This individual's twisted view of Freemasonry is not what Freemasonry or the Knight Templar teach. He is a wacko who committed mass murder.

Perhaps this tragic event is a good lesson for all of us. Not all Muslims are terrorists just like not all Christians are crazed gunmen. The freedom of religion and the freedom of political affiliation are fundamental rights is a free and democratic society.

The young victims in this shooting spree were not Marxists, they were members of the Labour party. This is why Harper's name calling and labels are so offensive. The crazed gunman was a member of a right wing political party that campaigned against immigration.