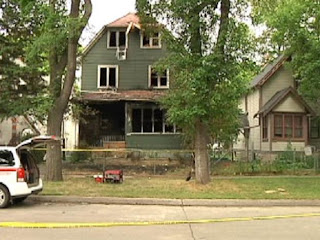 With all these firebombings in Winnipeg, there's finally been a fatality. Emergency crews were called to a working fire in the 200 block of Austin Street North around 2 a.m. Saturday, said officials. Eight people were inside the 12-suite rooming house. Six were sent to hospital in critical condition. Of those, two remain in critical and four died in hospital, said police.

Winnipeg police have made an arrest in connection with the weekend rooming house fire that killed four and left two others critically injured. Police said the fire is considered a multiple homicide. Neighbours told CBC News that the rooming house is often home to people struggling with addictions.

What a real tragedy. Police are treating this fire as a homicide but aren't claiming it's related to the biker war between the Hells angels and the Rock Machine in Winnipeg. They have a woman charged in custody. When you burn someone's house down with people inside, there are going to be innocent casualties. Report them.

According to CBC, members of the Redlined Support Crew, the street enforcers for the Hells Angels, operate out of a building in an industrial park on Bowman Avenue in Elmwood.