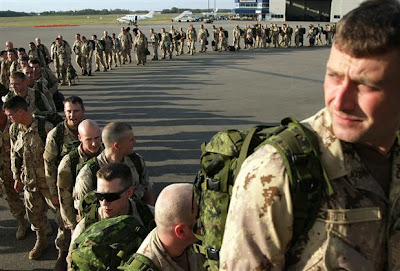 I don't want to flog a dead horse but I think it is important to look at the facts for us to really understand the big picture. NATO’s presence in Afghanistan has coincided with a sharp rise in opium production, leading to a global revival in heroin use.

According to UN figures, much of the blame lies with a 15-fold increase in Afghan opium production since 2001, the year Canadian soldiers helped the U.S. overthrow the country’s Taliban government. Afghanistan now supplies 90 percent of the world’s opium.

2001. That was indeed a pivotal year. By February of 2001, U.N. drug control officers said the Taliban religious militia had nearly wiped out opium production in Afghanistan - once the world's largest producer - since banning poppy cultivation last summer.

We know that the US soldiers in Afghanistan are now helping cultivate and harvest opium there. We were told that it was because if they didn't do it, the Taliban would but think about it. The Taliban are Muslim extremists. Sure hypocrisy exists within any religion but they are religious extremists who frown upon drug use. They had brought opium production to a grinding halt. NATO troops came in and have brought it back in a new heroin revival seen here at home.

Now that Canadian soldiers are pulling out of Kandahar and handing over control of that opium producing hub to the American soldiers who are admittedly cultivating and harvesting opium, we need to take the next step. We need to stop buying their opium for insite.

And we need to remember Julie Couillard's claim on national television that Maxime had said “the war in Afghanistan has nothing to do with building democracy in that country but has to do with the global control of the opium trade. It’s a drug war.”... "the War In Afghanistan was about the control of the global opium trade, not democracy". The oil pipeline was a factor as well.