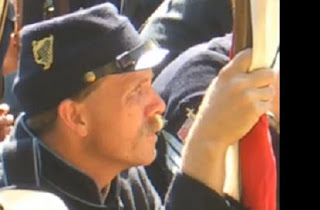 "What is the lesson of Iraq and Afghanistan?" I ventured. "We shouldn't be there," Bishop said. "You got to read the book of history. He who doesn't remember history is destined to repeat it. Look what happened to the British. Look what happened to us in Iraq, and we were in cahoots all along with Saddam Hussein, that no-good son of a bitch."

Interesting analogy. I don't think the invasion of Iraq was wrong because it was a long and hard struggle with many casualties. I think it was wrong because it was based on a lie. Yes Saddam Husein was yet another CIA asset who was sold chemical weapons to use on Iran. Iraq had nothing to do with 9/11. Bush said they had Weapons of Mass destruction. He was wrong. Then after all the carnage of a foreign invasion based on a proven lie, his final pep rally displayed a banner that said Mission Accomplished. Mission accomplished alright. The oil companies and Dick Cheney's Haliburton made a fortune which the American taxpayers are now paying for.

Afghanistan was different. If Bin Ladden really was responsible for 9/11 then something had to be done. Yet Bin Ladden was found in Pakistan not Afghanistan. The CIA confession video didn't even look like Bin Ladden. The third tower collapsing into it's own blueprint at free fall speed due to heat and fire is simply unscientific.

There were many irregularities that tainted the Afghan mission. Unicol was one. Not only was the Taliban trained by the CIA to fight the Russians, Unicol were wining and dining them over in Texas trying to win them over so the Taliban would give them the contract for the Central Asia gas pipeline through Afghanistan. Shortly after the Taliban ended up giving the contract for the oil pipeline to an Argentina firm named Bridas, Afghanistan was invaded and that decision was reversed.

The invasion of Iraq was just plain wrong and the war with Afghanistan became very confused and tainted. Handing over prisoners to be tortured and harvesting opium pretty much confirmed the mission went bad. Very bad.

Yet the article was about the historical civil war which it claims was over the issue of Slavery. I'm glad I'm not the only one that thinks that is what the war was about. I had always concurred with the brother from Boston who asked, who wants a Union with people who fought a war for the right to keep slaves?

I got in an argument with a biker from Tennessee who used the Southern flag as part of their logo and said it was racist. He claimed many Confederates fought in the civil war for independence not slavery. If that is true that would soften my heart towards the south. Yet the historical realities of the time are hard to deny.

The Irish had sympathy for the Abolition Movement. They opposed British occupation of Ireland and supported the American Revolution. Daniel O'Connell sent word to the Irish in America inviting them to support the end to slavery because it was a cause they as a people supported through their own struggles.

I personally, can't see any good in fighting a war for the right to keep slaves. If the south wanted to be independent then that's fair enough but slavery is nothing to boast about or endorse. 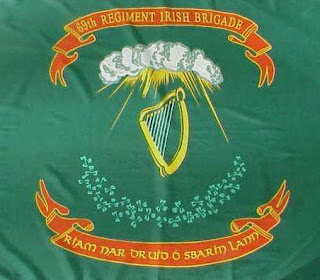