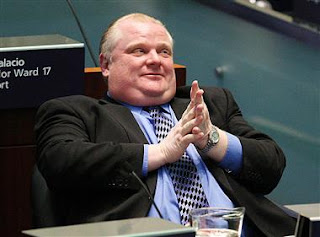 Well Toronto Mayor Rob Ford is at it again. He was caught talking on his cell phone while driving and a mother told him to get off his cell. She claims he gave her and her daughter the finger. He denies giving he the finger but his office admits he was on his cell.

This is another one of Stephen Harper's drunk drivers. He had a dui charge in Florida and was caught with marijuana then came out to endorse Harper in the election. He admitted to lying about yelling and swearing at a couple while he was drunk at a hockey game in 2006.

The more I read about this guy them more it becomes clear he is a psychopath. Yes he is a fat f*ck. He looks like Java the hut. But that's no crime. The crime is being an abusive liar and that is what he is. He was charged with assaulting his wife. This is Team Harper. God help us. 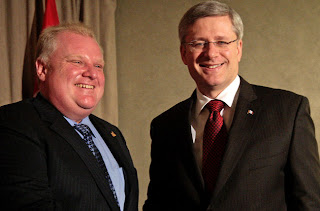