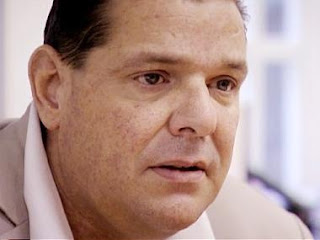 Police say Sean Hoare, the whistle blower reporter who alleged widespread hacking at the News of the World, has been found dead. Wow. And his death is not considered suspicious. Wow. How can an unexplained death, not be suspicious?

Hoare gave an interview to the New York Times in 2010 that bolstered allegations the phone hacking was a widespread and accepted practice at the tabloid. He also said that Coulson encouraged the practice. Hoare was let go from the News of the World for problems related to drinking and drugs.

Well one of those two allegations I believe. I believe the phone hacking was widespread and was an accepted practice but I don't believe he was fired for drinking and drugs. He might have been fired for drinking and drugs but there is not a snowball's chance in Hell I believe those allegations to be true. He was a whistle blower. Whistle blowers get fired. That's illegal but common. They also get slandered.

Hoare had been in contact with the Guardian and the New York Times only last week, stating that the News of the World staff used police technology to track phones. That's believable too since we just heard how the scandal has extended to include police resignations.

David Cameron claims they turned a blind eye to the allegations previously because they are media whores and want the media on their side. No kidding. This brings us to the next logical conclusion which was my gut feeling all along. Where on earth did these tabloids get the technology to tap telephones at Buckingham palace? Yes that would imply a police connection but it would also imply a secret service connection, MI 6.

We know MI 6 are also media whores. We saw that in Operation Mass appeal. That whistle blower died of a suspicious suicide as well. MI 6 have been keenly interested in having an in with the media ever since Operation Ajax back in Iran during the /50's.

Andy Coulson has been cleared of any wrong doing now that the witness is dead. The crisis has roiled the upper ranks of Britain's police, with Monday's resignation of Assistant Commissioner John Yates - Scotland Yard's top anti-terrorist officer - following that on Sunday of police chief Paul Stephenson over their links to Neil Wallis, an arrested former executive from Murdoch's shuttered News of the World tabloid whom police had employed as a media consultant.

Murdoch denies responsibility for hacking scandal. No kidding. So does Coulson, Cameron and MI6. Now that the witness is dead, the case is closed. Big surprise.

But David Cameron did say he will apologize if his former communications chief is found to have lied about his role in the phone-hacking scandal. That's so nice. We're so sorry uncle Albert. We're so sorry your witness died.