The regulation of Canadian Banks 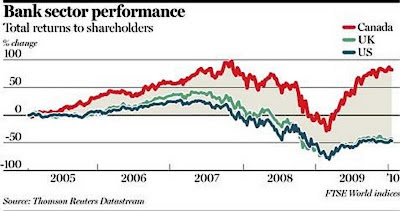 I saw an interesting video clip from an annalist explaining why he thought the Canadian Banks escaped the huge collapse that banks in the US and England faced. He attributed it to luck and government regulation.

Unless of course the bank can convince taxpayers to bail it out so it can then continue to make more and more money from investment fraud and laundering drug money. The annalist in the video clip talked about Basil II. Canada adapted those regulations early which helped them while the US delayed those regulations which hurt it.

Now, I have no idea what Basil II is, other than the fact that Basil is not only a herb for seasoning but it is also a city in Switzerland where the accord was created. I am somewhat concerned about an international banking conglomeration with absolutely no public accountability to any government whatsoever.

It's not just risky loans. It's investment fraud and laundering drug money. BCCI was a huge bank collapse which was the direct result of these two factors. One article claims According to Wikipedia, a free online encyclopedia, BCCI was transformed by the head of Saudi intelligence into the “biggest clandestine money network in history”.

Registered in Luxembourg, at its peak, it operated in 78 countries, including Barbados and Jamaica, and had assets in excess of US$20 billion, making it the seventh largest private bank in the world by assets. BCCI’s rapid growth, the encyclopedia said, alarmed the financial community, as well as regulators. Their rapid growth resulted in a rapid collapse.

In this claim we see a third factor emerge, "intelligence." Along with drugs and fraud we see the involvement of "intelligence" agencies. It wasn't just Saudi intelligence. The Company was directly involved with BCCI as well as in the Texas banks collapse. BCCI collapsed in 1991 costing taxpayers millions.

The trial run for the bailout fraud was in Texas. MCorp collapsed in 1989 costing taxpayers $2 billion. Neb Bush's Silverado's collapse from JNB Explorations cost taxpayers $1.3 billion. Once again, these collapses weren't the result of risky loans to people before a market crash. The real reason behind these bank collapses was investment fraud. MCorp and Silverado was directly related to the Bush Family fraud of fake oil wells.

The three largest banks in Texas that fell in the S&L crisis were also involved in the CIA's Iran Contra just like BCCI was. The three banks were Texas American Bancshares, then chaired by Bobby Corson, Allied Bancshares of Texas, then chaired by the infamous Walter Mischer, and thirdly, MCorp.

Mischer and Corson were later investigated by various Congressional committees as to the nature of unrepaid Iran-Contra loans. By 1989, it was determined that the CIA had borrowed for illegal, covert operations some $350 million from these three intuitions. It also failed to repay that amount. These banks were involved principally in fraudulent Iran-Contra related profiteering - realm estate loans, oil and gas ventures, illegal securities transactions, ect.

This was all made possible because of The Depository Institutions Deregulation and Monetary Control Act of 1980 (DIDMCA) which had phased out a number of restrictions on banks' financial practices. Then the Garn–St. Germain Depository Institutions Act of 1982 (Garn–St. Germain), further deregulated banks as well as deregulating savings and loans. First they deregulated the banks, then they defrauded the banks and bailed them out with tax dollars. That is the double scam.

In return the banks benefited too. Removing restrictions on interest charges Canadian mortgage interest rates increased from a low of 10.31% in August of 1978 to a high of 21.46% in September of 1981 which doubled a family’s monthly mortgage payments and caused many foreclosures in the /80's. Privatization and deregulation to circumvent public accountability is not a good thing.

One article claims Canada’s banks and its financial regulatory system have emerged from this crisis as a model for the world to follow. Why would we change our system and deregulate it so we can be susceptible to the same problems that have reoccurred in England and the US?