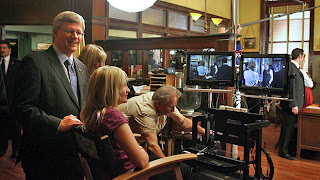 Gag me with a spoon. Stephen Harper is taking a role as a clueless cop on the TV show Murdoch Mysteries. Somewhat offensive since he promised to get tough on crime if he was given a majority government only to slash funding for the RCMP and the Gang Task force after he was elected. Maybe we should have an episode where he gets tar and feathered instead. That would sure boost ratings.

And on a matter of personal privilege, Brian Mulroney was a director on Barrick gold's international advisory board along with George Bush when Barrick gold was involved with Bre X in that fraudulent gold mine in Indonesia. If anyone is going to get sued it's Brian Mulroney for committing perjury when he sued the Canadian government for slander and accepted a $2.1 million settlement. Turns out he lied about not getting kickbacks from Airbus and thereby defrauded the Canadian taxpayers of that $2.1 million settlement. Let's recoup that before you steal our pensions. 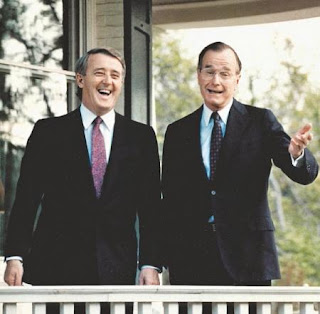