Good Friday and the Meaning of Easter

Back in Ireland, mostly in the north, they wear a badge of an Easter lily this time of year to remember the noble sacrifice of the soldiers who died during the Easter Rising in 1916. It was a proclamation and a movement that declared this truth to be self evident, that Ireland was free. The seven noble men that signed that inspired declaration signed it with their blood. They were executed for leading that rising which prepared the way for Ireland to become a Free state then later a free republic.

Remembering that noble sacrifice and that inspired declaration is important. They prayed that Ireland would prove itself worthy of its august destiny and that that no one who serves that cause will dishonour it by cowardice, in humanity, or rapine. A noble tradition worth remembering. I also submit that the Easter lily is also symbolic of the resurrection of Christ. That is another great sacrifice we would do well to remember since his atonement was infinite and struck for our freedom long ago.

I almost had second thoughts about making this post in the event that it might offend someone but then I thought since when did I ever let that stop me. Religion is such a forbidden topic these days. We aren’t allowed to talk about it any more. Yet there is a large Bikers for Christ movement out there. They are represented at most Toy Runs. They even had that Bikers Church in Surrey start up last year.

In fact the mother of that guy in Grand Prairie who was arrested in that cocaine bust went on an on about Christianity as she stalked, harassed and threatened me. I thought it was somewhat hypocritical. Kinda like Big Tony using the Lord’s name in vain. He wasn’t swearing he was just mocking his professed faith with his abominable deeds he filmed and laughed about.

Likewise, Jimmy Hughes is a born again Christian who admits to being a hitman. In fact he brags about it. Yet he refuses to admit to who he murdered when he was a hit man. That refusal mocks God and mocks the atonement. That's not Christianity. That's hypocrisy.

The guy in Grand Prairie bragged about being part of the baseball team, a puppet club for the Hells Angels. They sell cocaine for the Hells Angels and enforce for the drug dealers in GP. Hardly something a Christian would do, let alone brag about. So anyways, here’s my take on Easter.

Several years ago an Indo Canadian woman I worked with asked me why Christians called Good Friday good if that was the day Jesus was killed. I didn’t really know what to say. It’s kind of hard to explain the atonement in five seconds or less.

They say religion and politics are the two subjects people should never discuss, yet they are two subjects that interest me. Obviously there are dark sides to both. People can really mess up politics or religion. There tends to be herds of sheep blindly following either with no clue as to where the road they are on is going.

Religious or not people have standards. In fact I personally find it easier to trust most atheists than many Christians. An atheist does good because they believe it’s the right thing to do not because they believe they are going to get a reward in heaven. Which leads us to Good Friday and the concept of Christ.

They say Easter and Christmas are the two times of year most people who claim to be Christians actually attend church. Well, it’s like that in Ireland at least. Good Friday is a time of mourning for Christ’s suffering and crucifixion. It is accompanied by Ash Wednesday and Lent which is when people usually try and give up some bad habit.

Although Christ was full of compassion, when I think of Christ I don’t think of a flowery wishy washy weasel. Physically chasing the money changers out of the Temple took strength. Confronting the religious leaders at the time calling them liars, hypocrites and extortionists took strength. To endure the kind of suffering he faced, he had to of had a profoundly strong character. A Muslim friend of mine originally from Fiji once encouraged me to see the movie the Passion of Christ. I was kind of surprised to hear the movie be recommended by a Muslim. He said to me quietly, it’s hard to understand why God would let one of his prophets suffer so much.

Muslims tend to agree that Christ was a prophet sent from God. They just don’t tend to agree on the atonement and the resurrection. Nevertheless, the idea of why bad things happen to good people is important to understand. In this life we have free agency. We are free to make choices. Sometimes innocent people suffer as a result of our choices. Yet life does not end at death and we are all ultimately responsible for the choices we make.

In Catholic cathedrals they have what’s known as the stations of the cross. An artistic recreation of Christ’s journey carrying his cross on his way to be crucified. I have a painting in my home of Christ falling onto his knee under the weight on his cross. He’s looking down in agony after being beaten and mocked with a crown of thorns on his head. He pauses exhausted for an eight count before he rises to continue his journey. 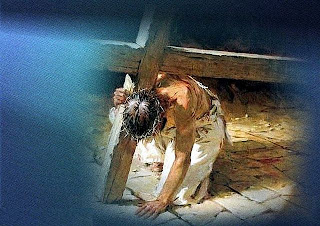 For me it is a profound image. Just as profound as a picture they used to have on the wall at the Harbor Light food line in East Vancouver. It was a painting of Christ walking on the water in Galilee. Peter had called out to him from the boat and asked if his master would perform a miracle and let Peter walk out to meet him which he did. Only the storm began to rise and Peter was filled with fear and began to sink. As he cried out to the lord for help, he reached out his hand. Christ grasped his hand and stopped him from going under. For a lot of people in the DTES it is indeed a profound image.

So whether or not we believe in God isn’t relevant. We all know good and evil exists and we are all free to make choices knowing that the choices we make do in fact effect others. Today I was speaking with a friend who was somewhat frustrated and said what do I have to do to be forgiven? Is it over for me? Is it impossible for me to ever be forgiven? Hardly. Although I don’t believe it’s as simple as saying Abracadabra, I do think it’s possible for anyone to change at any time no matter what they have done in the past.

The Bible says that if we walk in the light, as God is in the light, then the atoning blood of Jesus Christ will cleanse us from all sin. It says all sin not just some sin. I am a firm believer in the motto no matter what your past, you have a spotless future. That is so true. So relating all this flower power to the gang war, is it possible for a gang member who has committed murder to be forgiven? Yes it is. Is it possible for a low life deviant who has committed gang rape to be forgiven? Yes it is. It’s not as easy as waving a magic wand but it is possible. It begins with telling the truth and stop denying everything. It’s not as easy as ratting out all your friends who did the same thing so you can cut a deal and get off without being punished. It starts with a realization how your conduct has hurt others and a genuine feeling of remorse not rationalization for the pain you have caused. Taking responsibility for your actions.

It’s kind of like the Grim Reaper. You can pay me now or you can pay me later. Either way you will be forced to face the consequences of your decisions one day. If we don’t deal with it in this life, we will have to deal with it in the next. Call it karma. That suffering, that torment Christ experienced in the garden of Gethsemane. That pain caused Christ, even God, to tremble and bleed at every poor. So great was his suffering for the anguish of his people.

We call Good Friday good because Christ has paid that debt for us. Yet there are things we have to do and if we don’t do them, then we will experience that pain and anguish ourselves. Hell isn’t a place where God spanks us for eternity telling us I told ya so. Hell is coming face to face with God and experiencing all the pain we have caused others first hand where no lie and no rationalization will save us.

This Easter it is important to remember the resurrection, yet it’s also important to remember the suffering of Christ which led up to the resurrection. After all, he is despised and rejected of men. A man of sorrows acquainted with grief. Because he has felt our pain and sorrow he has graven us on the palms of his hands. Our walls are continually before him. That is why he is filled with compassion and reaches out to help us aspire to something higher. Yet the choice is our. It always is.