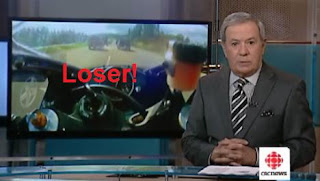 The loser of the year award goes to the idiot who posted a video of him weaving in and out of traffic and center lining at high speeds. Police have identified the motorcycle which belongs to an Esquimalt woman. Her 25 year old son is the one accused to have been riding the motorcycle since he has a record of speeding and driving without insurance. The news caught the idiot bragging on facebook. Now the punk is making his mother take the fall for it. That earns him the eternal finger and the thumb on the forehead.

Of course the Booby prize once again goes to Mike Robatzek, the Whiterock Hells Angel who was caught doing the same thing on video with a pink princess seat on the back of his bike. Some kids just never grow up.

That's something we make fun of young kids for doing. Not senior citizens in a mid life crisis. It is irresponsible and immature. Center lining at high speeds in traffic. What if someone changes lanes? If you want to commit suicide jump off a bridge. Don't put others at risk.