Harper wants to stay in Afghanistan 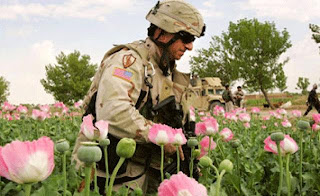 No wonder Stephen Harper wants to stay in Afghanistan. It's a big money maker now that the allies have returned Afghanistan to being the worlds largest suppliers of opium after the Taliban had it almost completely shut down in 2001. That created the panic and the shortage. Based on UNODC data, there has been more opium poppy cultivation in each of the past four growing seasons (2004–2007) than in any one year during Taliban rule. In the year 2000, several years after they captured Kabul, the Taliban banned opium production, slashing Afghan opium production from about 76% of word production in 2000 to 6% in 2001. 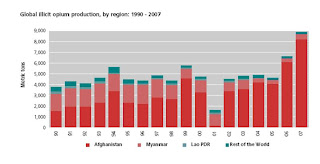 It is tragic Eight soldiers died of drug overdoses between 2010 and 2011. I guess that's what they call the casualties of doing business. Julie Couillard claimed that her boyfriend at the time, Maxime Bernier told her that the war in Afghanistan had nothing to do with promoting democracy. It was about control of the opium trade. Then again the Taliban did decide not to let UNICOL build that gas pipeline right before they were invaded. After the invasion that decision was reversed. No I don't see us leaving Afghanistan very soon. The Neo Cons are making too much money off of it.