30th Anniversary of the Canadian Charter of Rights 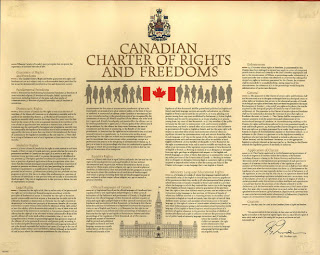 The 30th anniversary of the charter of rights has come and gone. The Harper government has not said a word about it but I most certainly will. It’s sad to see a political party refuse to acknowledge any success of their political “opponents.”

After I spoke a senior member of my “political party” leaned over and chastised me. They said you never acknowledge any success of your enemy. You always try to make them look bad. I thought that was so petty. No two people agree on every issue yet no too people disagree on every issue either. Building on common ground and admitting there are things that we do agree about is a good thing.

I’m not a big fan of Paul Martin, but I am a big fan of the Charter of Rights. I think that is a wonderful document. Even as we speak, Harper and his warrantless internet surveillance and his support for off shore prison camps are trying to remove those sacred rights.

That’s like saying the American Revolution was pointless because all the rights in the US Constitution and the Bill of Rights was already to be found in British common law. Maybe so but they weren’t all being enforced. The Bill of Rights spells out protection for individual rights and freedoms which is a good thing.

Likewise the Canadian Charter of Rights is a very good thing. Like the US Constitution and the Bill of Rights, it is a measuring stick that we should compare new invasive laws with like off shore prison camps and warrantless surveillance with. Three cheers for the Canadian Charter of Rights. Lest we forget, dark forces are trying to rob us of those inherent rights as we speak.

Posted by Dennis Watson at 1:31 PM