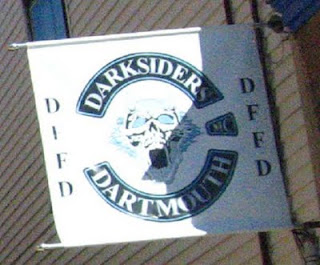 Police specializing in organized crime are keeping a close watch on the Darksiders, a Dartmouth-based motorcycle club that recently expanded to Bridgewater. Police say the club is a criminal group set up to defend turf for the Hells Angels. The Darksiders have had a clubhouse on Portland Street in Dartmouth for three years.

Mike Weatherley, the group's sergeant-at-arms, said police constantly watch club members. He said the Darksiders support the Hells Angels, but said his club is not a criminal organization.

Weatherley's biker vest is covered in red and white pins paying homage to the Hells Angels. He said the affiliation with the biker gang grew out of a friendship between one Darksider and a childhood friend, who's a member of the Hells Angels in Ontario.

Weatherley's vest may well be covered in Red and White but his smelly nose is sure brown. Look at their ridiculous logo. It sure sucks to be a puppet. Both ways. 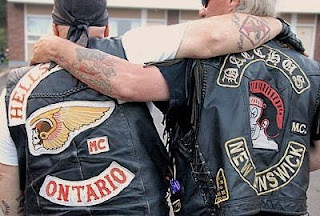 Likewise, the members of the St. George chapter of the Bacchus Motorcycle Club say they are not Hell's Angels. Of course not. They aren't real boys, they're just puppets.

In an interview at their clubhouse on Canal Road, chapter president Tim Guthrie and member Morton Cooke say Burden's comments have caused the eight members of the chapter great pain and embarrassment. "I feel bad about what a lot of people think of us now. People look at us differently now. My daughter has even questioned me over it so I had to sit down and explain all this to her," said Guthrie.

lol what's the matter? Did the Po Po tell the public the real story about how you got your name? Bacchus was an alternate name for Dionysus, the Greek god of wine, women and song and their patch is a Roman soldier. Dionysus, my ass. If the club was named after Dionysus, they would be called Dionysus but they're not they're called Bacchus who was a Roman soldier alright. He was openly gay with Sergius and secretly Christian. They should be proud of their true heritage. They're the first 1% club to chose the patron saint of homosexuality for their logo. At least they put a condom on their nose for all that HA ass kissing.