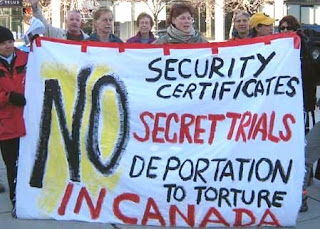 The Federal Court of Appeal says Mohamed Harkat deserves a new hearing to determine if he's a threat to national security. This is the guy that Canada imprisoned based on information from the CIA which turned out to be false. So instead of saying sorry we made a mistake and open themselves up for a law suit, they've found a technicality to drag it on and give him another chance at a hearing. How about let him go now that you know he was wrongfully imprisoned on false information.

The court said it was unfair that the Ottawa man was not allowed to see top-secret summaries of phone conversations recorded by the Canadian Security Intelligence Service between 1996 and 1998. Now all of a sudden CSIS claims the recordings are missing because they destroyed them. Bullshit. They knowingly imprisoned an innocent man. This is why we should not let them destroy the Constitution and the Charter of Rights. This is why they shouldn't have secret CIA "black-site" prisons that torture suspects without a fair trial.

The goal of the Justice for Mohamed Harkat web site is to abolish the use of security certificates in Canada which enables the federal government to detain and deport permanent residents and non-citizens without charge and to deny them access to the evidence related to their detention.