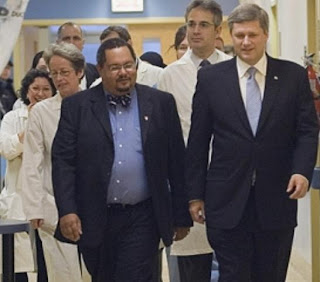 The Vancouver Province is reporting that The Harper government did away with an office mandated to oversee the activities of Canada's spies Thursday, a move critics say opens the door to abuses of power by the Canadian Security Intelligence Service.

The Office of the Inspector-General of CSIS played a key role in ensuring Canada's spies don't break the law, according to Jez Littlewood, head of the Canadian Centre of Intelligence and Security Studies.

Let’s connect the dots and take a look at the pattern that keeps repeating itself. Remember Harper’s pal Arthur Porter? He was the chair of that committee that was “supposed” to be a CSIS watchdog. He resigned after his questionable ties to an Israeli arms dealer was made public.

That was last November. Now, after the anti corruption committee was shown to be corrupt, they are doing away with that office entirely so CSIS will have absolutely no accountability whatsoever. This is really wrong. It doesn’t take a brain surgeon to see how wrong it is.

Ben-Menashe, the “lobbyist” that the former chair of this committee was tied to, wrote a memoirs called Profits of War, filled with accounts of international espionage and conspiracies he says he either participated in or was privy to. These spy agencies need more accountability now more than ever, not less. Stephen Harper is doing some very serious things to destroy our liberty. He is not a Conservative. He is a neo con.

Ben-Menashe also testified in 1991 that he had personally witnessed George H. W. Bush attend a meeting with members of the Iranian government in Paris in October 1980, as part of a covert Republican Party operation — the so-called October Surprise — to have the 52 U.S hostages then held in Iran remain there until President Jimmy Carter, who was negotiating their release, had lost the 1980 presidential election to Ronald Reagan. Imagine that. I’m working on the Canadian connection to that incident as we speak.