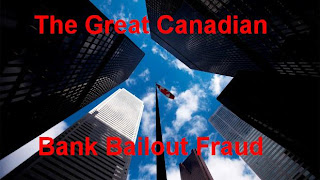 We did bail out the banks in Canada. I’ve talked about this before but I want to centralize the links because the story keeps getting buried deeper and deeper as time goes on. Most of us thought, myself included, that we didn’t bail out our banks in Canada because we didn’t need to. We didn’t have the same mortgage fraud going on and we didn’t see the same ripple effect of multiple foreclosures of homes like they did in the States. Logic would then imply that there wasn’t the same need to bail out our banks in Canada. That’s without even discussing the fraudulent nature of the Bank bail out in the States.

In fact, when the Occupy movement started in Canada, the Harper government came right out and said our situation in Canada is different than in the US because we didn’t have to use tax dollars to bail out the banks in Canada like they did in the US. We believed them because we thought that was a true statement. After all, that’s not something the government could lie about and get away with or is it?

They did lie about not bailing out the banks. Rabble .ca pointed out that fact very clearly. Some will cover their ears and scream because of the source I just cited. That’s a left wing news source, we can’t trust it. I don’t care if it’s left wing or right wing. Is their claim true or false? That is what I care about.

The Green Party has also posted that the Harper Government did indeed bail out the banks to the tune of $69 billion. That’s billion not million. That single act took us from a surplus in the millions to a deficit in the billions. That was unprecedented.

We can and will debate the merits of a bank bail out. The problem is, we were never given that option and we are still forbidden to debate that issue because then Harper Government has lied about it and covered it up so most voters and most taxpayers doesn’t even know it happened.

This is not a small lie like Peter McKay denied he referred to Belinda Stronach as a dog when he was caught on tape doing so. This is not a small lie like claiming they didn’t know about Harper’s senior aids criminal record for fraud when it was mentioned before he got the job. This isn’t even a big lie like denying we knew Canada was handing over prisoners to be tortured in Afghanistan when we did. That was a big lie. Firing the whistleblower didn’t change that.

Saying that we didn’t bail out the banks when we did is a huge lie. It is unprecedented. It makes the Robocall scandal, as serious and offensive as that is, to be small potatoes in comparison. Cutting our sacred pensions to give to the banks who didn’t need it is the biggest political scandal in Canadian history.

People will scoff at the mainstream media for not running the story. Yet I don’t really think it’s their fault. I really think most people don’t know it happened. To say it did would be to call the current government liars. I think people really need to open their eyes because someone is trying to pull the wool over them.

Now that we have established that the Harper Governement did lie about giving the banks a tax payers bailout, we need to discuss the merits of a bank bailout. Beofre we do that we need to come to some kind of financial accounting. Was it &69 billion or was it more than that? Was it a single payment or where there many payments. Which would make the true accounting problematic. We gave them &65 billion at one point but we gave them more money at several other points.

In all fairness one could argue that statement was time sensitive. We didn’t need to bail out the banks in Canada like they did in the States. That is a true statement. We didn’t give the banks a huge amount of money at first. Stephen Harper went to England and told David Cameron that we don’t believe in bailing out the banks with tax dollars in Canada. Some point after that visit he came full circle and the dirty deed was done.

BCCI was the largest bank collapse in British History. That bank collapsed because of, arms dealing, drug smuggling and money laundering which is always tied to investment fraud because greed always consumes them. They always want a higher return on their money so they resort to fraud to rip people off to do it.

Posted by Dennis Watson at 1:54 PM