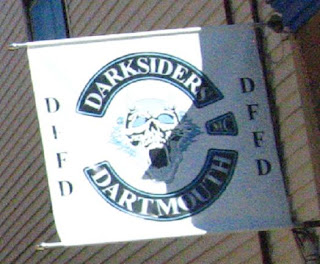 This is interesting timing. Right after the Darksiders move into Bridgewater, NS a new brothel gets busted there. A 30-year-old Halifax woman was arrested this week in Bridgewater for allegedly operating a brothel in the town, police say. Bridgewater Mayor Carroll Publicover said the arrest did not come as a surprise to him. Publicover said it's a Halifax problem that is spilling over into his town, about 100 kilometres away.

"We have, I think, a situation where anything that's happening in HRM, whether it's prostitution or drug use, all those things that you find in large urban centres are now happening in areas as far as 100 kilometres away," he said.

Gee, what organized crime group do we know of that spreads like an STD from inner cities to take over smaller towns and infect them with their viruses?

Speaking of viruses, today there was a big meeting of affiliates at the Darksiders clubhouse in Dartmouth. That's the one that used to be owned by the Hells Angels. Isn't that surprising.