The Rise of Thomas Mulclair 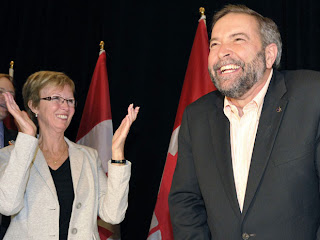 I saw a commercial on TV last night about Thomas Mulclair picking up where Jack Layton left off. I have to admit it was a positive message and I highly doubt that it was paid for with tax dollars like the dishonest ads for the HST. I didn’t say a word about the NDP leadership race at the time because I really had nothing to say about it. I didn’t really know the candidates and I just wanted the democratic process to fulfill it’s course which it did.

I was happy to hear that Thomas Mulclair was from Quebec. My first thought during the leadership race was why wasn’t the interim leader that Jack Layton assigned running? Quebec needed a voice. They deserved a voice for their huge support during the last election. Jack Layton did more for Canadian National unity than any other politician before him. All the Bloc Quebecois “separatists” joined his vision for a united Canada. That is a good thing.

I was also happy to hear that Mulclair did not want to merge with the Liberals. No disrespect to the Liberals. I do think they have every right to exist and I don’t think they deserved to be wiped off the face of the map at the last election like Conservatives did after the Brian Mulroney disaster.

One of the political commentators on TV cited the fact that Thomas Mulclair doesn’t want to merge with the Liberals and suggested that he wanted to crush them. Yet I see no evidence of that. Everyone agrees the Harper government wants to crush them. That’s a given. That is their MO. The Robocall scandal is further evidence to that fact. Yet I really don’t think that’s the MO of Jack Layton or Thomas Mulclair.

Political analysists also claim that Thomas Mulclair wants to bring the party to the centre. That may well be the case but I really want us to rise above linear politics and these left and right stereotypes that have fed misconceptions for so long. We need to look at issues not serotypes. “The NDP will tax and spend.” Well the NeoCons and their pork barrel politics are quite capable of that. The only difference is that the NeoCons steal from the public and give it to their insider friends as well as the fat banks and corporations.

I really don’t think Jack Layton or the NDP would wage war with the environment and obsess about removing any protections for the environment that we currently have. I think Jack Layton and the NDP represent responsibility and sustainability not dishonest, mean spirited removal of individual rights with warrantless surveillance and tax paid propaganda. I don’t support all the misguided stereotypes about the NDP but I do think Thomas Mulclair is a step forward in protecting individual rights that the Harper government is trampling on and I do think Thomas Mulclair has a vision of building the kind of Canada I want to live in. Je me souviens.

Posted by Dennis Watson at 1:23 PM