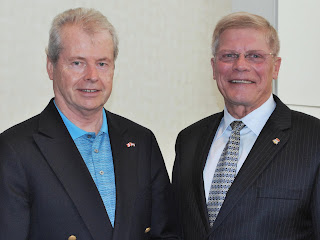 There was an article in the Vancouver Province today that talked about how BC Liberals are continuing to jump ship in favour of the BC Conservatives under the leadership of John Cummings. I found the sub heading to the article somewhat bizarre. It said Free-enterprise parties tied as Adrian Dix and the NDP sit at 43%.

Hold the door. Gordon Campbell and Christy Crunch's liberals have absolutely nothing to do with free enterprise. Stop saying that. Where did such an absurd misconception come from? Low and behold it came from a Chuck Strahl press release.

Chuck Strahl, a six-term MP for the Chilliwack-Fraser Canyon federal riding, will chair the campaign to elect Liberal candidate Laurie Throness on April 19. In a press release Wednesday, Strahl said the B.C. Liberals are the only free-enterprise party of choice. That is the source of the absurdity.

Likewise, the Harper Government is not a Free Enterprise Party. Not at all. They talk the talk but they most certainly don't walk the walk. Their is a difference between supporting huge corporations greed to rip off consumers then supporting free enterprise which implies supporting small business. Ironically enough, Jack Layton spoke a lot about supporting small business. At least when Jack Layton said someone I was a lot more likely to believe him than I was likely to believe anything Stephen Harper of Peter McKay said. Firing whistleblowers for proving they lied was shameful.

I would say John Cummings provincial conservatives are a free Enterprise party. I just think that Harper lost that vision when he merged with Mulroneyism. Something the real free enterprise party broke away from for it's apostasy of conservative values. Pauil Forseth however, has shown he supported Free Enterprise. He opposed TELUS' use of off shore call centres. He is a solid candidate for the BC Conservatives.

Liberal Back Chat in the Vancouver Province:

The message to politicians is: Don't you ever, ever treat us with such arrogance and disdain or we will vote your sorry butts out.

The electorate showed this on the HST referendum - and it should come as no shock - that the majority would rather face four years of an NDP government than reward the Liberals for past wrongdoings.

Vote NDP, Conservative, Green or even the Pot Party. Just do not vote for the B.C. Fiberals.

The Fiberals have sold us all out with their corruption.

Cheating and lying eventually catches up, you can only fool people for so long.

PART NAME IS A LIE

What can you expect from a party that calls itself the "Liberal" Party, but is right of Attila the Hun. Even the name of its party is a lie.

Worst government in B.C. history. After being a longtime Liberal, I am voting NDP. I don't see things changing with a Conservative government. If anything, it will create more corporate tax breaks. Just look at the federal Conservative Party.

Best news I have heard in years. What would be even better is to see the Fiberals wiped off the political map in B.C.

WAKE UP TO 'LIEBERALS'

Hallelujah! People are finally starting to wake up to the Lieberal corruption. Trouble is 14 months is a long time to wait. They can cause lots more damage in that length of time. Better to recall them now to save what's left of the province.

The NDP are just sitting on their hands. No need for a platform, just wait and take power. B.C. does another polar swing to the left. The right just wants to sell off B.C., then all move to the U.S.A. to play golf 'til they need medical, then they'll come back.

Time to do away with this gang/party system. Stop business and union donations to parties. Parties should be working for the taxpayers, not entities who want something in return. Stop all this corrupt lobbying.

"Even if we were to believe that the chief of defence staff and the generals were plotting behind the minister's back to lie to Parliament, to lie to Canadians -- highly unlikely -- it would only prove that the defence minister is not in control of his own department," Mulcair said during question period Wednesday.

Down south Obama just signed legislation to finally stop insider trading within congress. Sounds good. That is a huge problem right now. Let's see if it's ever implemented. After all, Guantanamo bay is still open.