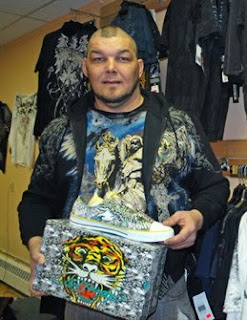 CBC is reporting that a man testified that he has ties to the Hells Angels in a Yellowknife courtroom Thursday during a drug trafficking trial involving nearly $90,000 worth of marijuana and cocaine.

Robert Livingstone and Rory Moore are charged with possession of drugs for the purpose of trafficking. Livingstone appeared in court to testify against Moore. He testified that he got the drugs from his cousin, who is connected to the Hells Angels. Robert Livingstone has a grade three education and is an admitted drug adict.

He said that while his cousin didn’t offer him money to deliver the drugs to Yellowknife, his cousin often manipulated and bullied him into being his mule and drug runner. He said he was never told what to do with the drugs once he got to Yellowknife. Livingstone testified that he hid drugs in the truck the two were driving from B.C. to Yellowknife.

Speaking of Yellowknife, Rob Yews, owner of recently opened BB Rox, has brought popular clothing like Affliction, Christian Audigier and Ed Hardy, all makers of limited edition clothing, to Yellowknife. Wasn't he the poster boy at the Hells Angels' party in Langley? 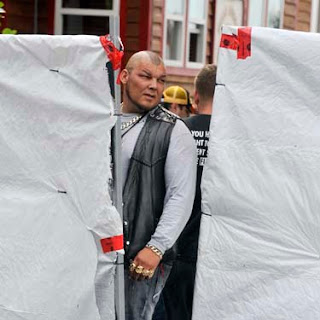