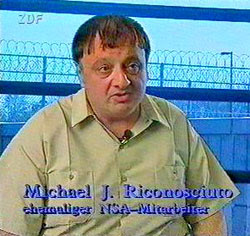 Hurricane Carter was a boxer who was racially profiled and wrongfully imprisoned for a murder he didn’t commit. They made a movie about his story and Bob Dylan sang a song about him.

Conversely, Michael Riconosciuto is a CIA whistleblower who was wrongfully imprisoned after testifying at a Congressional Hearing. Within a week of Riconosciuto's testimony he was arrested by Federal Agents. Even while under arrest, he was subpoenaed to testify before a U.S. Federal Grand Jury seated to hear the INSLAW case. On Thursday, November 12, 1991 Riconosciuto made a declaration to the court. After the declaration was filed his wife, Bobbie, was arrested in Napa on the eve of his testifying at Federal Grand Jury.

The thing is, everybody knows the CIA has a long standing tradition of arms dealing, drug smuggling and money laundering. Everybody knows about Mena Arkansas. Everybody knows the PROMIS software the CIA sold Canada had a Trojan horse in it. In the INSLAW case Mike testified in, a Federal Bankruptcy Court ruled that the Justice Department was deceitful and stole the $6 million software package. In 1996, Earl W. Brian was convicted on ten counts of fraud and sentenced to four years in prison. He was released in 2002. The problem is, nobody cares. There’s no reason to keep Michael Riconosciuto in prison any more.

The RCMP investigated Michael Riconosciuto and the INSLAW case. They know he was wrongly imprisoned. The frustrated investigating officers said no one outside of law enforcement will ever know what happened because they aren’t allowed to say what they found. Here’s the problem: Keeping an unlawful state secret is unlawful. It makes one an accessory to the crime.